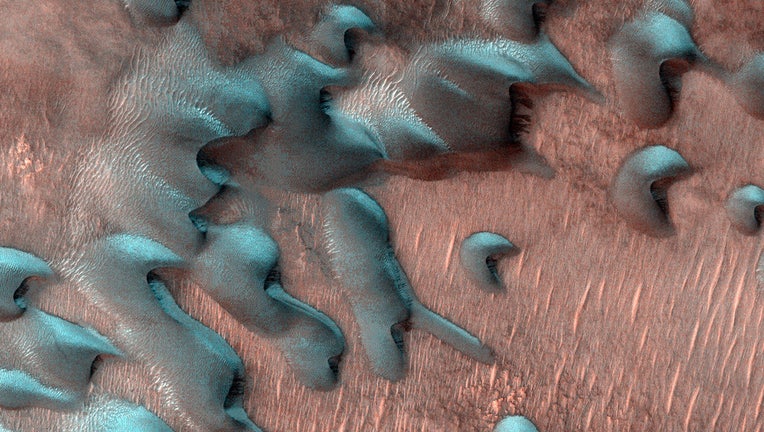 FILE - This picture was taken far north of the equator just two days after the winter solstice when the Sun was just a few degrees above the horizon. Sand dunes are moving across this landscape from top left to bottom right. Winter frost covers the c (NASA/JPL-Caltech/University of Arizona)

During the colder season, Mars’ landscape is completely transformed into quite literally an otherworldly and iridescent winter scene.

The red planet can reach sub-zero temperatures during the colder months and especially at the poles where it gets as low as minus 190 degrees Fahrenheit (minus 123 degrees Celsius), NASA said.

Despite the frigid temperatures, the wintry surface offers stunning views. 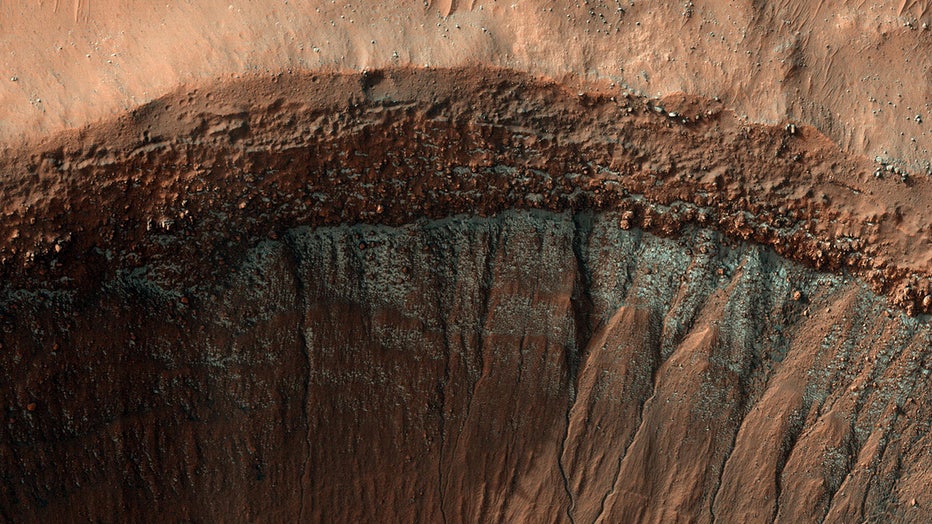 FILE - The HiRISE camera captured this image of the edge of a crater in the middle of winter. The south-facing slope of the crater, which receives less sunlight, has formed patchy, bright frost, seen in blue in this enhanced-color image. (NASA/JPL-Caltech/University of Arizona)

The frost appeared iridescent in the light and gave off a blue/teal hue. 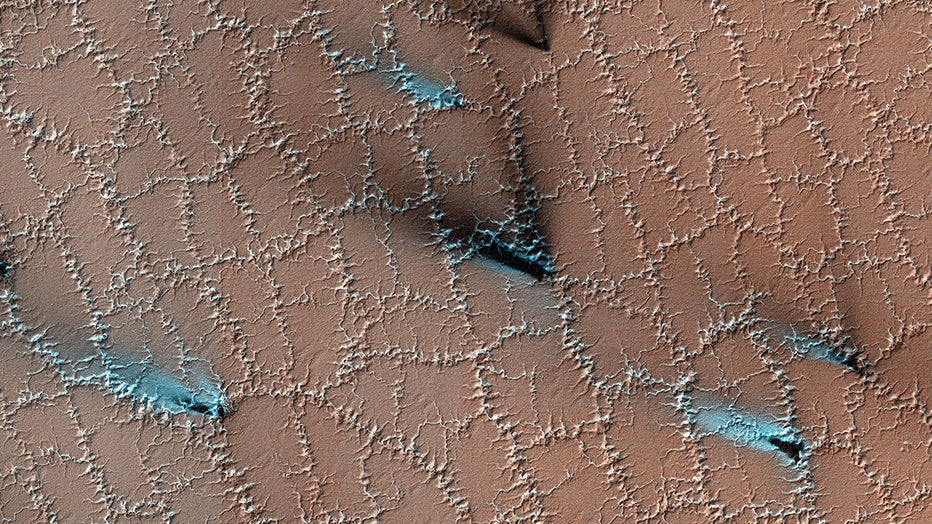 FILE - HiRISE captured this spring scene, when water ice frozen in the soil had split the ground into polygons. Translucent carbon dioxide ice allows sunlight to shine through and heat gases that escape through vents, releasing fans of darker materia (NASA/JPL-Caltech/University of Arizona)

Mars has 2 types of snow

Mars has two types of snow, according to NASA.

Unlike Earth’s snow which consists of mainly water and ice, Mars has two: water ice and carbon dioxide, or dry ice.

Since the air on Mars is thin and it’s so cold, the snow consisting of water and ice turns into gas before it can get to the planet’s surface, NASA said.

The dry-ice snow, however, does reach the ground.

"Enough falls that you could snowshoe across it," said Sylvain Piqueux, a Mars scientist at NASA’s Jet Propulsion Laboratory in Southern California whose research includes a variety of winter phenomena. "If you were looking for skiing, though, you’d have to go into a crater or cliffside, where snow could build up on a sloped surface."

On Earth, snowflakes tend to form in a hexagonal shape. This happens because of how our water molecules bond when they freeze, NASA explained.

On Mars, however, since its atmosphere consists of mostly carbon dioxide, the molecules bond in forms of four.

Launched in 2005, the Mars Reconnaissance Orbiter’s mission is to advance our understanding of Mars through detailed observations of its surface.

The Orbiter is carrying one of the most powerful cameras ever sent on a mission to another planet, according to NASA.