The CEO of FB Society got the idea to sell the wristbands from one of his Ukrainian employees. In a few short weeks, they've raised thousands of dollars with help from customers. And they're just getting started.

PLANO, Texas - The refugee crisis in Ukraine is growing—and so is the need for humanitarian support.

A North Texas restaurant group is helping with a donation campaign that involves wristbands.

The CEO of FB Society got the idea to sell the wristbands from one of his Ukrainian employees. She immigrated to the U.S. when she was 8 years old but still has plenty of family in Ukraine.

In a few short weeks, they've raised thousands of dollars with help from customers. And they're just getting started.

At Haywire Restaurant in Plano, customers can get a one-of-a-kind drink, a fresh cut of meat and a unique wristband.

Jack Gibbons is the CEO of FB Society, which owns Haywire and several other popular North Texas restaurants. He is encouraging folks to "band together for Ukraine." 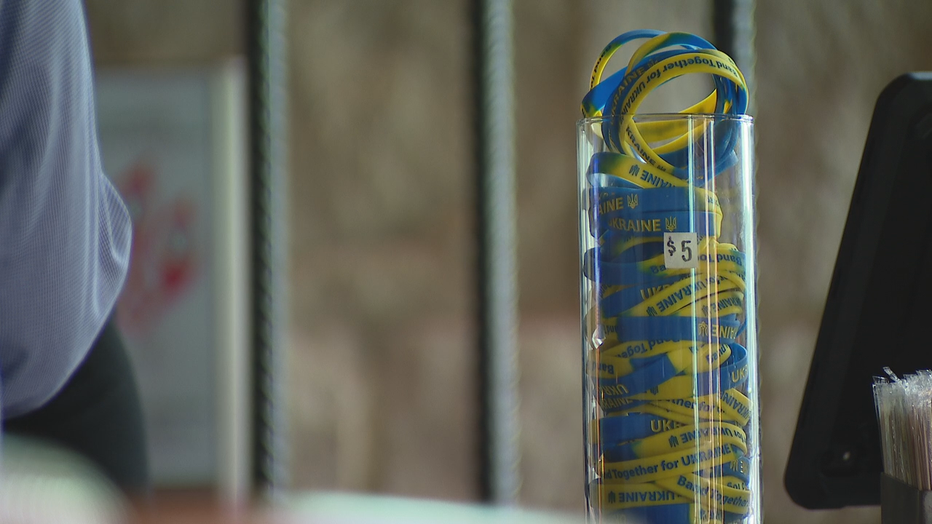 "Short term, we want to help refugees and the humanitarian needs right now in Ukraine," he said.

Customers can buy the yellow and blue silicon wristbands for $5 at any of the FB Society restaurants. People can also buy them online.

Gibbons says the response has been amazing.

"One of my daughter's teachers was actually at an event and ended up buying 100 bands, bringing them back to the school," he said. "People want to make a difference."

So far, they've raised some $50,000 from selling the wristbands. 100% of the proceeds will go to Razom, a vetted nonprofit that’s supporting refugee needs in Ukraine.

The need is great.

"Right now, we're heard President Zelensky begging for evacuations," said Tom O'Connor, senior writer for Newsweek. "We've seen the beginning of that so far, but of course, there are still many trapped in the city."

Early Monday, more than 100 Ukrainians — including elderly women and mothers with small children — were evacuated from a steel plant in the ravaged city of Mariupol. They've been trapped there for more than two months.

Some very brave people ventured into the devastated Ukrainian city of Mariupol on a mission of mercy and rescued civilians. Plus, Newsweek senior foreign policy write Tom O'Connor says there are fears of a desperate act by Vladimir Putin.

"The city is besieged, and Russia is really looking to take it," O'Connor said.

They'll join the five and a half million Ukrainian refugees who have fled the country during the 10-week war and forced to start a new life with nothing.

Gibbons wants them to feel the love from Texans.

"If we just in some small way can make a difference and help that country and what's going on, it just feels like the right thing to do," he said.

Long term, Gibbons says his company would like to help rebuild restaurants in Ukraine.

For now, the goal is to help Ukrainians get back on their feet.