The fire started around 3 p.m. while most people were away at work. While that helped with evacuations and prevented injuries, it didn’t do much to limit the property damage.

On Tuesday, fire crews continued going through the neighborhood, assessing which homes are safe to return to and which can have power restored.

The fire was caused by a crew cutting grass in a nearby field. A spark from the equipment ignited the dead, dry grass.

Davis said the wind and dry conditions were the most challenging factors in trying to get it all under control. Winds were about 20 to 25 miles per hour at the time.

"Because of the intensity of the wind I noticed when I was even assisting with efforts initially to put the fire out. As I would get fire out and I would move forward, I would look behind me and fire was re-igniting right behind me," he said. "I even looked up at one time where our brush truck was driving and spraying out fire. As it got away from it, the fire was re-igniting around the truck." 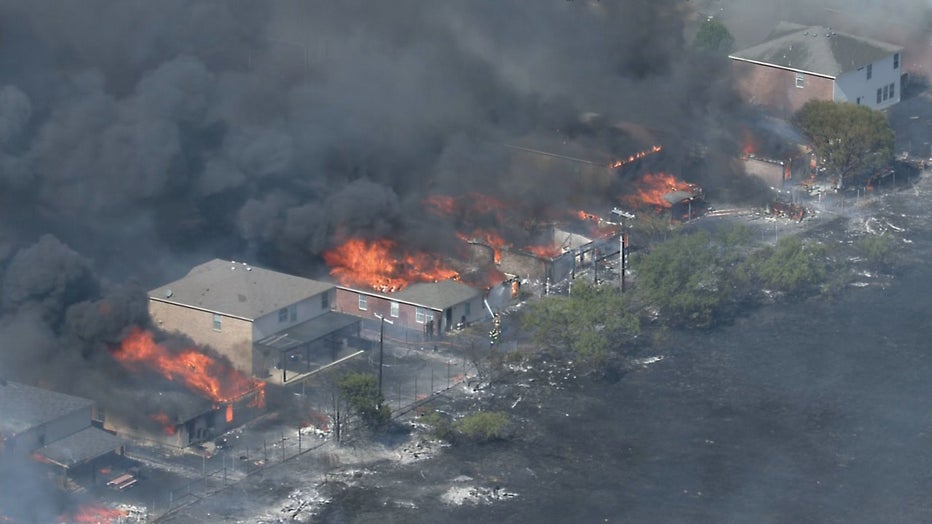 Andre and DeShannon Camp lost their home Monday. They were both away when the fire began.

"I was away on business travel, and then I got a call that it was a grass fire behind our home," DeShannon recalled.

"It's very challenging right now. Everything we own in life is gone," Andre said.

Behind their home was the undeveloped, dry grass that was being cut when the fire sparked.

Andre’s sister called him seeing his house on TV news.

"By the time I actually got into the neighborhood, it was smoke and everything everywhere," he said.

A dozen area fire departments responded to the fire. Andre and DeShannon’s house was one of the nine deemed a total loss.

"We have not seen anything to this magnitude for the city of Balch Springs," Davis said. "I do not know anyone surrounding us that seen anything of the significant of a loss at one time. This is certainly one for the history books for our area."

9 homes destroyed, 17 others damaged in most costly fire in Balch Springs history

Settled families lost everything as well as those beginning families.

Homeowner Mitch Ryan was able to save some things. He unlocked the house remotely and a neighbor got his dogs out.

"We were under the impression that we lost everything we had just because of the way that everything looked," he said.

Ryan was able to save his wedding heirloom and his wife’s expensive medications.

Ryan and all his family are safe.

"I always say every day above ground is a great day," he said. "I have a motto that I live by called, ‘Never give up.’ I tell everybody that all the time, and I have all my friends telling me that right now."

The Balch Springs Fire Department plans to meet with all the homeowners at its rec center. The Red Cross will also be there to help those families.

Those who want to donate to the fire victims are encouraged to drop off donations at the Opal J. Smith Food Pantry.