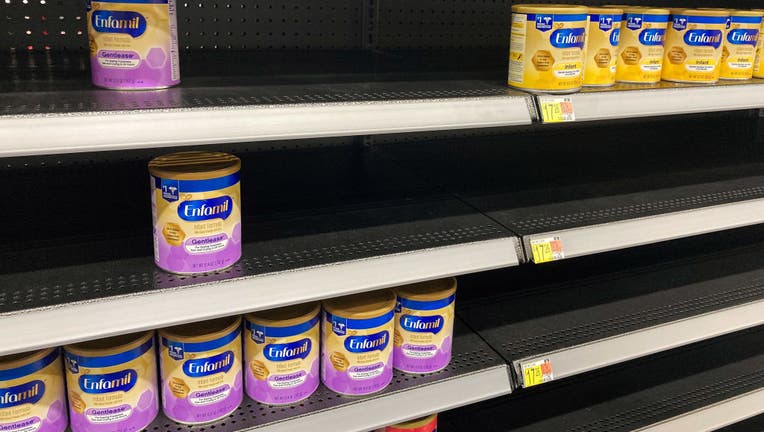 A baby formula display shelf is seen at a Walmart grocery store in Orlando. Stores across the United States have struggled to stock enough baby formula, causing some chains to limit customer purchases. While manufacturers report that they are produci

WASHINGTON (AP) - Parents across the U.S. are scrambling to find baby formula because supply disruptions and a massive safety recall have swept many leading brands off store shelves.

Months of spot shortages at pharmacies and supermarkets have been exacerbated by the recall at Abbott, which was forced to shutter its largest U.S. formula manufacturing plant in February due to contamination concerns.

On Monday, White House press secretary Jenn Psaki said the Food and Drug Administration was "working around the clock to address any possible shortages."

On Tuesday, the FDA said it was working with U.S. manufacturers to increase their output and streamlining paperwork to allow more imports.

For now, pediatricians and health workers are urging parents who can’t find formula to contact food banks or doctor’s offices. They warn against watering down formula to stretch supplies or using online DIY recipes.

President Joe Biden speaks about his administration's plan to tackle record-high inflation in remarks on May 10, 2022.

"For babies who are not being breastfed, this is the only thing they eat," said Dr. Steven Abrams, of the University of Texas, Austin. "So it has to have all of their nutrition and, furthermore, it needs to be properly prepared so that it’s safe for the smallest infants."

Laura Stewart, a 52-year-old mother of three who lives just north of Springfield, Missouri, has been struggling for several weeks to find formula for her 10-month-old daughter, Riley.

Riley normally gets a brand of Abbott’s Similac designed for children with sensitive stomachs. Last month, she instead used four different brands.

"She spits up more. She’s just more cranky. She is typically a very happy girl," Stewart said. "When she has the right formula, she doesn’t spit up. She’s perfectly fine."

Like many Americans, Stewart relies on WIC — a federal program similar to food stamps that serves mothers and children — to afford formula for her daughter. Abbott’s recall wiped out many WIC-covered brands, though the program is now allowing substitutions.

Trying to keep formula in stock, retailers including CVS and Walgreens have begun limiting purchases to three containers per customer.

Nationwide about 40% of large retail stores are out of stock, up from 31% in mid-April, according to Datasembly, a data analytics firm. More than half of U.S. states are seeing out-of-stock rates between 40% and 50%, according to the firm, which collects data from 11,000 locations.

Inflation, supply chain issues, and the avian flu are to blame for high egg prices. When you go to buy some treats for an Easter celebration, expect fewer options at some bakeries and a higher bill to go with it.

Baby formula is particularly vulnerable to disruptions because just a handful of companies account for almost the entire U.S. supply.

Industry executives say the constraints began last year as the COVID-19 pandemic led to disruptions in ingredients, labor and transportation. Supplies were further squeezed by parents stockpiling during lockdowns.

Then in February, Abbott recalled several major brands and shut down its Sturgis, Michigan, factory when federal officials concluded four babies suffered bacterial infections after consuming formula from the facility. Two of the infants died.

When FDA inspectors visited the plant in March they found lax safety protocols and traces of the bacteria on several surfaces. None of the bacterial strains matched those collected from the infants, however, and the FDA hasn’t offered an explanation for how the contamination occurred.

For its part, Abbott says its formula "is not likely the source of infection," though the FDA says its investigation continues.

Chicago-based Abbott said it is increasing production at its other facilities to fill the gap, including air-shipping formula from a plant in Ireland.

The shortages are especially dangerous for infants who require specialty formulas due to food allergies, digestive problems and other conditions.

"Unfortunately, many of those very specialized formulas are only made in the United States at the factory that had the recall, and that’s caused a huge problem for a relatively small number of infants," Abrams said.

After hearing concerns from parents, the FDA said last month that Abbott could begin releasing some specialty formulas not affected by the recalls "on a case-by-case basis." The company is providing them free of charge, in coordination with physicians and hospitals.

Food safety advocates say the FDA made the right call in releasing the formula, but that parents should talk to their pediatricians before using it.

"There’s still some risk from the formula because we know there are problems at the plant and FDA hasn’t identified a root cause," said Sarah Sorscher of the Center for Science in the Public Interest. "But it’s worth releasing because these infants might die without it."

The FDA said the company is still working "to rectify findings related to the processes, procedures and conditions." Other infant formula makers are "meeting or exceeding capacity levels to meet current demand," the agency said.

Among other steps, the FDA said it was waiving enforcement of minor product labeling issues to increase availability of both U.S. and imported products.