The Armed Forces Bowl between Baylor and Air Force will go as planned Thursday, despite wind chills in the single digits by the time the game starts. But some other events surrounding the game have been called off.

FORT WORTH, Texas - The Armed Forces Bowl between Baylor and Air Force will go as planned Thursday, despite wind chills in the single digits by the time the game starts. But some other events surrounding the game have been called off.

Fans will be wrapped up in multiple layers as an arctic blast sweeps across Texas.

The Armed Forces Bowl put out a tweet showing the freezing forecast and telling fans blankets are allowed.

Dave Aranda will call the defensive plays in the frigid game for the first time since the Baylor coach was running the defense for LSU’s national championship team three years ago.

"There is a great opposing force coming at you unrelenting," he said. "So, this is the who-wants-it-most bowl." 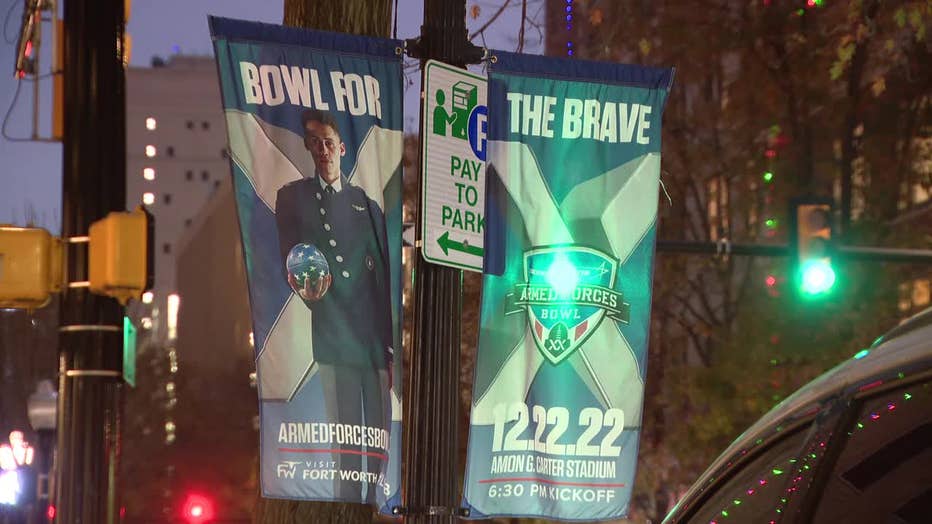 The opposing force Aranda is referring to is the bitter cold the players will deal with Thursday night.

The forecast calls for temperatures in the teens with a sub-zero wind chill at the home of TCU, Baylor’s Big 12 rival.

The Falcons (9-3) are making their sixth Armed Forces Bowl appearance, more than any team. Baylor’s pedigree is probably the strongest of any of their opponents. It’s the first meeting between the schools since 1977.

Air Force may think they'll have an edge since they see more extreme winter weather in Colorado than Waco does.

"We played Nevada in Colorado Springs, and we caught a day where the temperature was like 7 degrees and the windchill was -18," Air Force coach Troy Calhoun said.

The game is on, but the weather spoiled some of the other bowl events.

The Veteran's Village was canceled due to the weather, which is near the Tailgate Outpost, which has also been called off.

The weather possibly zapped the bowl excitement out of the fans in town for the game. There weren’t many people walking around Sundance Square or the bars and restaurants along West Seventh Wednesday afternoon.

If you are willing to brave the cold, you can still get a ticket to the game as low as $8 for standing.

But for the players on the field, coaches told reporters the weather will be more mental than physical.

"There’s been games in all of our past and for a lot of players where you can’t feel your fingers anymore. You can’t say the words you want to say because your mouth doesn’t work anymore," Aranda said. "I know it’ll be something, and we hope to overcome it."

Unrelated to the weather, Air Force's band will not be at the game. The Boswell High School Band from Eagle Mountain-Saginaw ISD will play in their place.