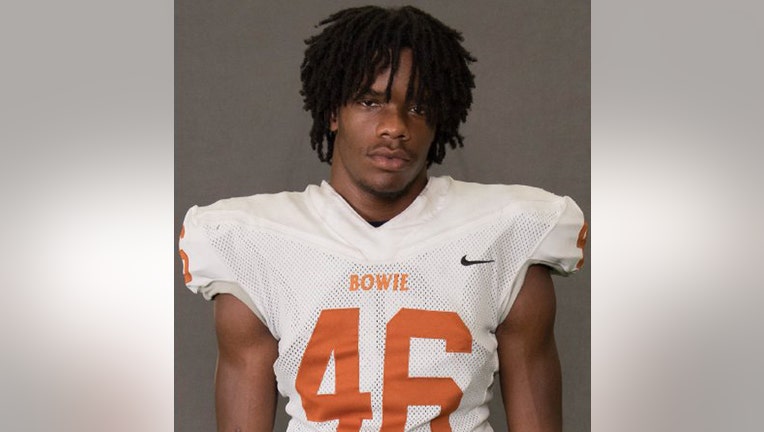 ARLINGTON, Texas - Police say 17-year-old Anthony Strather was trying to break up a fight when he was shot and killed Thursday night near his school.

Arlington police are still looking for the shooter who killed Strather, wounded another Bowie High School student, and wounded a nearby neighbor.

The fight among several teens has students at Bowie High School shaken and mourning.

“It’s a tragedy. So many people are affected when you have a tragic loss, as my grandson,” Lawrence Smith, Strather’s grandfather, said.

Smith got his grandson, who he called “Tony,” into football and started coaching him when he was about six years old.

“Just what they call a beast. He’s a kid, his motor just doesn’t stop. He goes full speed, and that’s kind of what I taught him, but some things are God-given, he had all the God talent,” Smith said.

Smith said his grandson had plans to play in college.

Teammates and opponents held a moment of silence at Friday’s game for Strather. There was also extra security as a precaution, but there were no incidents.

On a day that the family should’ve been preparing to see Strather play under Friday night lights, they’re instead preparing to bury the talented defensive end, number 46.

Educators left the decision to play Friday night's game against Trimble Tech in Fort Worth up to Strather's teammates. They wanted to play to honor his memory. His friends in the stands tried to be strong for his family.

“He was always a person that he would see in the hallway,” said student Desiree Otina. “He would check on you. The nicest person and a good friend.”

Teammates and opponents held a moment of silence at Friday’s game for Strather. There was also extra security as a precaution, but there were no incidents.

“He was just a big brother to me. Playing football with him, he was a good teammate, never let nobody down. You’re feeling down, he’ll talk to you, bring you back up,” his friend and teammate, Jayden Jones, said.

Friends and family said Strather would’ve done anything for his friends, including jumping in to break up a fight, as police say he did Thursday after school.

“Any friends that have any distress situation with anything, he’s going to come to the aid of his friends. It’s unfortunate that it cost him his life,” Smith said.

Arlington student was breaking up fight when he was shot and killed, police say

Police say 17-year-old Anthony Strather was trying to break up a fight when he was shot and killed Thursday night near his school.

The shooting that killed Strather also wounded another student in the leg. A neighbor at home was also injured by a stray bullet.

Arlington police have cell phone video of the fight that led up to the shooting and are working with the school district to identify everyone involved.

So far, police said they haven’t been able to determine what caused the initial fight, and no other witnesses have come forward.

“I get it. Kids don’t want to tattle tale on other kids, but we have someone that is deceased. We have someone, a family, that is grieving the loss of their child, having to plan a funeral. We’re hopeful the kids will do the right thing and come forward,” said Arlington Police Lt. Christopher Cook.