People living in an Arlington apartment complex continue to deal with a frustrating situation two weeks after the start of last month's winter storm.

ARLINGTON, Texas - People living in an Arlington apartment complex continue to deal with a frustrating situation two weeks after the start of last month's winter storm.

Five days after FOX 4 last visited with Priscilla Williams, not much has changed. Her collapsed ceiling and other water damage at the Felix Apartments means she is without a place to live. 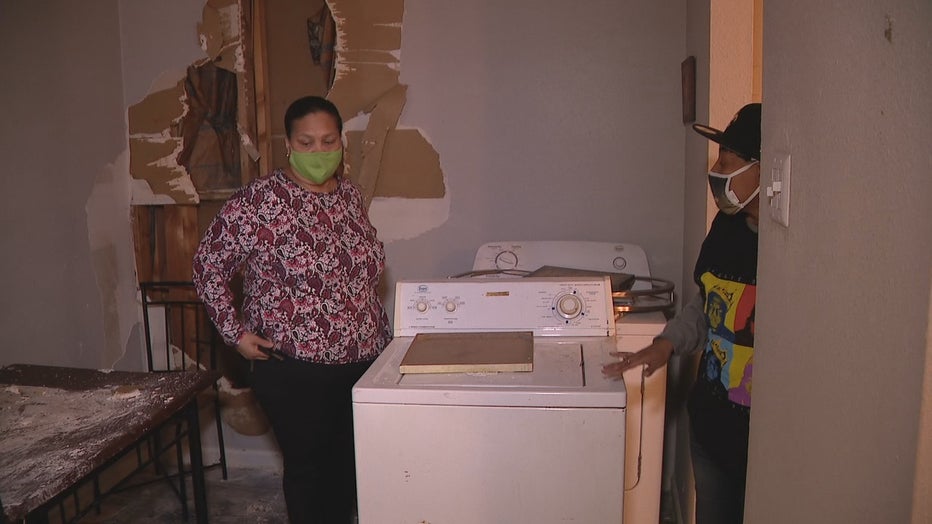 "Nobody is responding. Nobody will answer texts or the phone. They won’t get back with us or anything," she said.

The frustration is compounded by a lack of action by management.

Williams needs the complex to either relocate her to another unit or let her out of her lease.  Neither has happened, despite a manager last week coming to take pictures and stating she would have the matter addressed. Williams says she’s heard from no one.

"She hasn’t responded to us. I’ve been texting and emailing," said Robyn Johnson, Williams’ mother-in-law. "I went up to the office. They told us the district manager is the only person who can give you that letter, so nobody here will. So she can’t get out of this lease."

Arlington code enforcement teams are closely monitoring the complex and several others, which the city says are currently in violation for inadequate maintenance. They have received warnings, and hefty, daily citations could follow.

"The amount of tenants we spoke to here today there are some with damage," he said. "It’s not by any means the majority of the complex, but they do need to relocate them and help. Otherwise, we’ll be out here writing citations daily if we have to."

While the city cannot force property owners to take action with their tenants, it can apply pressure with citations which, in this case, could go as high as $2,000 per day.

"They expect me to live here and it’s all moldy and it smells. It’s unlivable," Williams said. "They want you to pay your rent. They want you to continue living here and say they’ll fix it. That’s going to take months because they have more apartments damaged than mine."

The office at the complex has not returned our calls. The registered owner of the Felix Apartments is a Dallas capital investment firm. Thus far, we have not been able to locate a contact for the company.