Nicole Harper says the PIT maneuver 'placed her life and the life of her unborn child at risk' (Credit: Andrew Norwood of Denton & Zachary, PLLC)

Arkansas - An Arkansas woman is suing an Arkansas State Police officer who she says "negligently performed" a Pursuit Intervention Technique (PIT) maneuver that resulted in her car flipping over on the highway at 60 miles per hour in July 2020.

Nicole Harper, who was pregnant at the time, was clocked going 84 mph in a 70 mph zone last summer, according to the lawsuit. Within seconds of Arkansas State Police Officer Rodney Dunn turning on his patrol cruiser's overhead lights, Harper pulled over to the right lane, turned on her emergency blinkers, and slowed to 60 mph.

She was "unable to safely stop her vehicle on the right or left shoulder due to concrete barriers and a reduced shoulder being on both sides of the road… leaving [her] with no room to safely pull over her car," the lawsuit states.

Dashcam video of the incident shows that about two minutes after turning on his lights, Dunn hit the pregnant mother's back left bumper, sending her car crashing into a concrete barrier and flipping over.

"I thought it would be safer to wait until the exit," Harper can be heard telling Dunn while upside down in her car.

"No ma'am, you should pull over when law enforcement stops you," Dunn replied as he tried to help Harper out of the car. "We call that a PIT maneuver. When people flee from us… that's what happens."

Dunn charged Harper with failure to yield to an emergency vehicle. 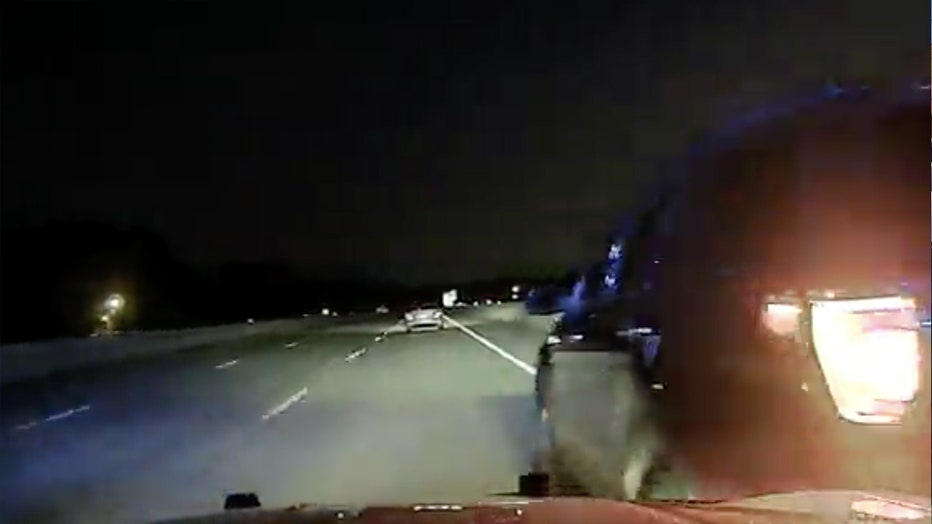 This still image from Officer Rodney Dunn's dashcam shows Nicole Harper with her emergency blinkers on just seconds before the PIT maneuver was performed that flipped her car. (Andrew Norwood of Denton & Zachary)

Her attorney, Andrew Norwood of law firm Denton & Zachary, alleged the PIT maneuver was "deadly force," adding that an exit was in just 1 mile and the concrete barriers ended about 20 seconds down the road.

"She wants policy change. She thinks they should look at the policies around PIT maneuver and re-evaluate the use of them," Norwood told Fox News Wednesday. "What was done is ridiculous. … It's extremely dangerous what was done."

Norwood said that Harper has some lasting anxiety from the experience and broke down in tears when she saw the video for the first time recently.

RELATED: ‘Something out of Hollywood’: Car explodes into flames on Texas highway

"What do I need to do in the future? Do I just stop in the middle of the road? Do I just lock it up and slam on the brakes in the middle of the road no matter where I am, no matter what?" Norwood said of Harper's thinking. "What if I'm on a bridge? Because the officer said in no uncertain terms, in the video, ‘It doesn’t matter where you are, you just stop.'"

Harper also contests that she did exactly what she learned to do in driver's education when being stopped by a police officer.

"Pull over to the right side of the road – activate your turn signal or emergency flashers to indicate to the officer that you are seeking a safe place to stop," the Arkansas Driver License Study Guide reads.

The Arkansas State Police did not return to multiple requests for comment on Wednesday.

A FOX16 investigation last month revealed that PIT maneuvers are increasingly being used by the Arkansas State Police. Between January 2017 and December 2020, PIT maneuvers were used 306 times, with half of those happening in 2020, according to the local news outlet.

At least 30 people have died and hundreds more have been injured since 2016 from PIT maneuvers, according to The Washington Post. Eighteen of those deaths occurred after police attempted to stop a person for speeding or another minor traffic violation.

Find the latest updates on this story on FOXNews.com.