DALLAS - North Texas voters headed to the polls Tuesday for the first election day during the COVID-19 pandemic.

The coronavirus postponed the primary election runoff a few months. The situation was certainly different for many, but voters say they were able to put aside COVID-19 concerns, feeling their voice was more important than ever.

From Denton to Dallas to Cedar Hill, polls welcomed voters starting at 7 a.m.

But just because it might have been a painstaking process didn’t mean people aren’t voting, according to Tarrant County Elections Administrator Heider Garcia.

“It’s been busier than expected, definitely,” he said. 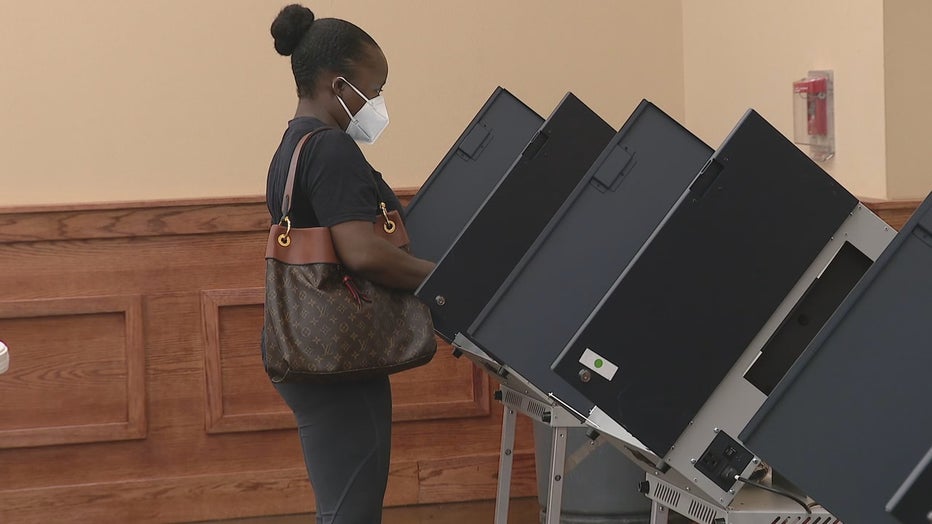 Garcia says ballots cast Tuesday outdid the 2018 and 2016 runoff elections. During early voting, more than a million ballots were cast.

“We did all the work to have the party, and at least everyone is enjoying it. They’re all out and on the dance floor,” he said.

“I thought there was going to be a line starting at 6 or 6:30, but there’s no one here which is a little concerning,” said voter Raha Assadi.

Some early risers had little company. But with time came voters pleased to see new guidelines in place.

“I saw everybody was in masks. I saw hand sanitizer if we needed it. I was social distancing between people,” said voter John Wicker. “Fortunately, we came at the right time and there weren’t too many people in there so it worked out great.”

North Texas voters&nbsp;headed to the polls Tuesday for the first election day during the pandemic.

At many polling locations, there were little to no lines. But that may not be an indicator of overall turnout.

Early voting, which ended Friday, saw a record number of Texans cast ballots. But the early voting period was also extended from 5 to 10 days.

Those who waited were comfortable with their decision.

"As long as we follow the CDC guidelines and we pay attention to what’s going on around us, we should be fine,” said voter Courtney Avakien.

Voters on both sides were compelled to turn out.

“I am encouraged to vote even more than I have ever been,” said voter Shomega Austin. “We are counting on our candidates to help us get through this pandemic.”

Inside, poll workers in protective equipment will sanitize each voting station in Dallas County and voters will be six feet apart.

The day wasn’t without a few bumps.

Air conditioning problems at Christ Cathedral Church in Fort Worth forced it to close Tuesday morning. And at Reverchon Park in Dallas, voters were sent to different locations until equipment issues were resolved an hour later.

Garcia says there were minor malfunctions, plus two polling places in the Fort Worth-area couldn't open.

“We had two locations the parties couldn’t find judges for, and that decision was made early yesterday,” he said. “We had some people saying, ‘I’m afraid of coronavirus. I don’t want to show up at this location.’ But we were able to find replacements.”

Elections administrators want to get voters in and out as quickly as possible to prevent the spread. That will be tougher in November with a longer ballot.

“If you are American, and you are all about being patriotic, there’s nothing more patriotic than voting,” Assadi said. “So I hope that people get out here and vote.”