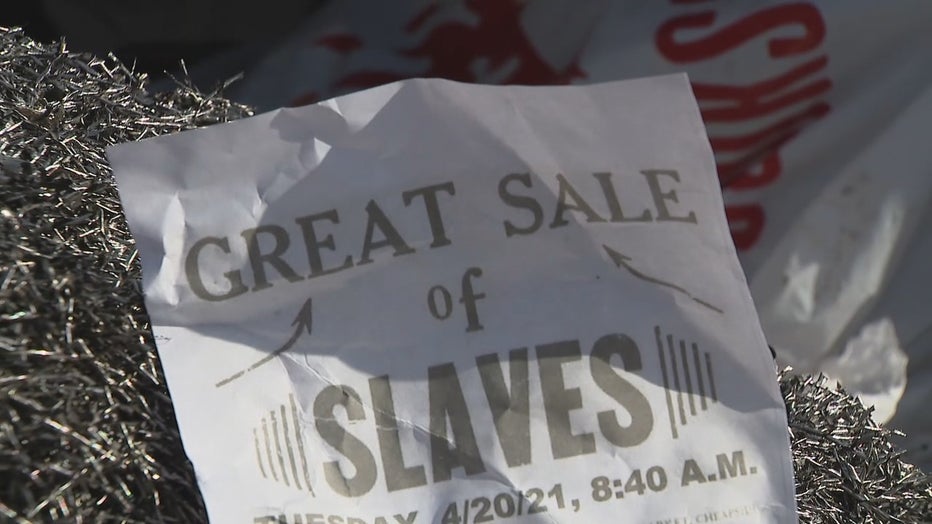 Last week, the district announced disciplinary measures taken against students who were part of a slave trade group chat.

"One of the students targeted in that chat spoke out during a Monday school district meeting.

14-year-old Chris Johnson spoke directly to the Aledo ISD School Board with his parents at his side to address a Snapchat conversation from last month between students discussing what he would be worth in a slave trade.

"If you think this has affected your job, imagine how we have been impacted," he said.

The district says those students were punished, but Chris and several others say that’s not enough.

"The only apology I am accepting is changed behavior," he said.

Fanning the flames on Monday, flyers announcing a slave sale were found near Aledo High School, Middle School and along busy roads.

Toni Lopez took a video as she picked up some of the flyers scattered on the ground.

"It looked like somebody had just thrown them out of their car and just let them land where they wanted to," she said.

Lopez collected nearly 50 of them to throw in her dumpster. Monday night, she and several other parents and students addressed the school board about the flyers and the Snapchat conversation.

"I don't know about you guys, but I would be embarrassed to be nationally known for the racism in my community," said Rosanne Hauck.

Some parents shared their own stories of racially charged encounters in Aledo.

"Several kids tackled my 8-year-old to the ground," she said. "One of the children said, ‘Put your knee on his neck.’"

"I want to know from you all, how are we gonna do better?" said parent Susan Nurse. "I don’t want an ‘I’m sorry.’ That’s not enough. What are we gonna do?"

"This behavior does not reflect the values of our school district or our community," she said. "It does remind us that we have work to do together to make sure that all of our students feel safe and valued on our campuses."

Bohn also mentioned the beginnings of a plan to fully address these incidents. That would include reinforcing current conduct rules and consequences, creating working groups between members of the school board and the community about race relations and parent training seminars. No set dates or specifics were discussed.

"We are reflective. We strive every day to be better than we were the day before in service to our children and each other. And this work is no different," she said.