ARLINGTON, Texas - It's been a tough bowl season so far, with a number of schools dropping out of games and five games being canceled entirely.

But not the Cotton Bowl, which is a semi-final in the College Football Playoff. It’s still set for Friday at AT&T Stadium.

The excitement is palpable.

Thursday afternoon, Alabama’s band and Cincinnati’s band battled it out for fans.

It’s one of many events in the run-up to the Cotton Bowl.

Fans are crossing their fingers they will get to see their teams play.

RELATED: No. 1 Alabama and No. 4 Cincinnati to square off at AT&T Stadium

Before the players hit the field on Friday, Alabama and Cincinnati had a much louder showdown on Thursday at AT&T Stadium.

The two universities faced off in a Battle of the Bands. 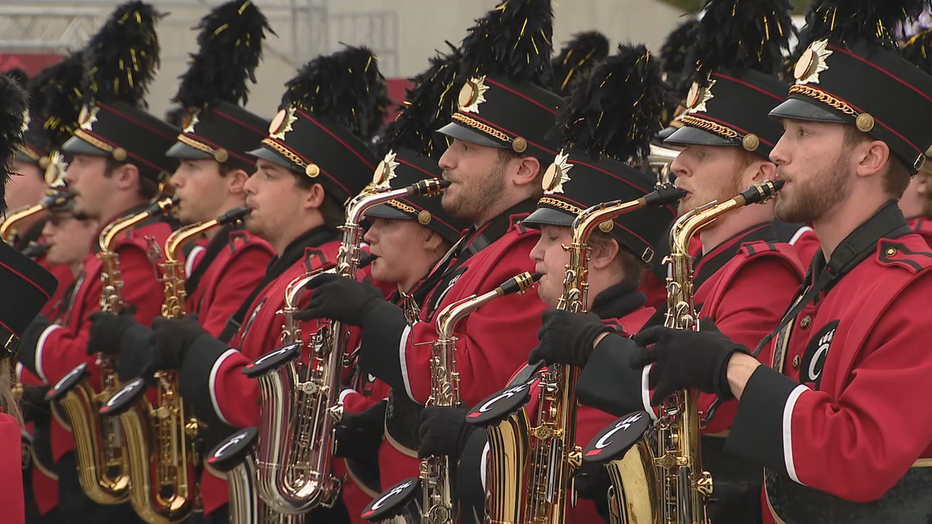 Most of the die-hard fans and band parents in attendance spent hours behind the wheel to get there.

All are relieved the game is still on after five other, smaller bowl games were canceled this month due to COVID outbreaks.

But the Goodyear Cotton Bowl Classic is a semifinal game on the College Football Playoff schedule, unlikely to be canceled with the winner playing for the national championship.

For Cincinnati native Tami Anderson, the trip was worth it.

"Dallas stadium!  I’m a Dallas fan too, so this is like the best of both worlds," Anderson said.

With more than 600 band members, it's no surprise there were a few Texans cheering on their kids.

The battle came down to two brothers on the saxophone. Cincinnati sophomore Noah Moorhouse and Alabama senior Christopher Moorhouse faced off.

Their parents, Micheline and James Moorhouse, drove 14 hours from Cincinnati to watch both bands duke it out.

"I had no idea they were going to bring them on stage together though. That was like the highlight. Like the game is going to be a disappointment after the battle of the bands," Micheline said.