Gov. Greg Abbott acknowledged the growing numbers of COVID-19 cases and hospitalizations in Texas on Monday but declined to enact any new rules or closures.

AUSTIN, Texas - Gov. Greg Abbott acknowledged the growing numbers of COVID-19 cases and hospitalizations in Texas on Monday but declined to enact any new rules or closures.

Texas broke a record for new hospitalizations for the eleventh straight day Monday. More than 3,700 COVID-19 patients are being treated statewide about double from the start of the month.

The positive test rate statewide is at 9.5 percent, also nearly double from the start of the month. There have been nearly 115,000 positive cases statewide.

“To state the obvious, COVID-19 is now spreading at an unacceptable rate in Texas, and it must be corralled,” he admitted. 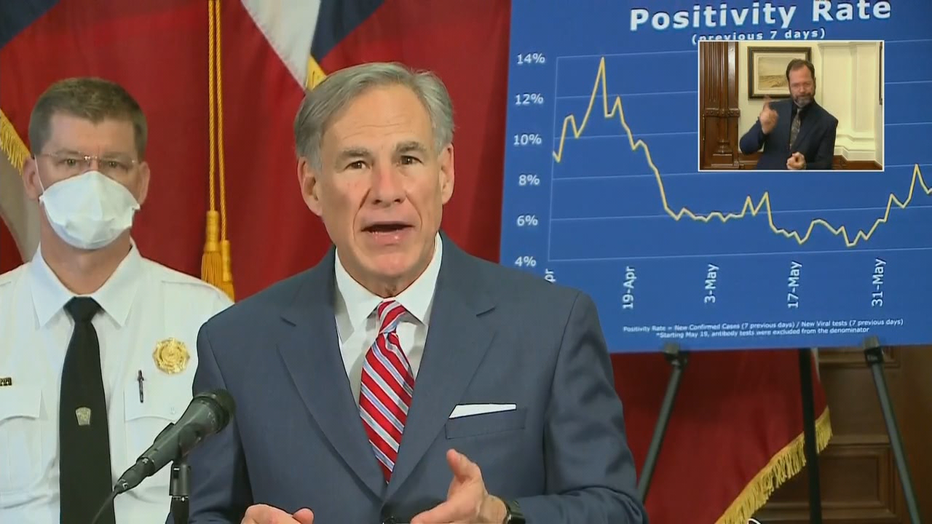 Abbott asked Texans to follow previously released health guidelines to help slow the spike in numbers, like social distancing and encouraging people to wear masks but not mandating their use.

“Wearing a mask will help us to keep Texas open because not taking action to slow the spread will cause COVID to spread even worse,” Abbott said.

He also said it was appropriate and important to maintain “a level of flexibility” in a state the size of Texas regarding mask rules. Abbott said no rollbacks of business openings will take place at this time.

“Closing down Texas again will always be the last option,” he said, later adding he believed the state didn’t need to make a choice between jobs and health.

"If those spikes continue, additional measures are going to have to be taken,” he said. “There's been pretty much a doubling of those numbers. If there continues to be a doubling, that would mean we are in an urgent" situation."

The governor says he’s working with the Centers for Disease Control and Prevention to create additional testing in hot spots, like Houston and San Antonio. He says he’s talking to hospital CEOs and has been assured and reassured that there are enough beds.

“The whole goal of flattening the curve wasn’t to prevent people from becoming infected,” she said. “It was to slow down the rate at which they do so we don’t overwhelm our healthcare systems, and I think that that is a key thing to stay focused about.”

UT Southwestern reported there's a 24 percent increase in hospitalizations across North Texas over the past week. There's also an increase in people under 40 years old being hospitalized. There is concern those numbers will rise after the July Fourth holiday.

The governor acknowledged that some cities are canceling festivities or hosting fireworks shows to be seen at a social distance.

“This might be the time that people are having their backyard BBQs or pool parties,” Trivedi said. “Those are still times when people could be becoming infected.”

The strategies to reduce the rate of spread without closing down include: following state protocols like handwashing and social distancing, TABC shutting down overcrowded bars, local counties enacting mask rules, making sure hospitals have needed resources, surging testing in hot spot areas.