New York City's mayor said he is looking into what legal action he can take against Texas for the busloads of migrants Gov. Greg Abbott continues to send without warning to the city. He said Abbott has refused to work with him on a coordinated plan.

New York City’s mayor is looking at what legal action he can take against Texas to force Gov. Greg Abbott to notify him when migrant buses are on the way. He said the city is overwhelmed.

NYC Mayor Eric Adams said he asked Abbott if they could work together to coordinate a plan, but Abbott never did and continued sending buses.

Nine arrived in the city Sunday. That’s the most in a single day.

Mayor Adams said the city is struggling to house the 11,000 migrants Abbott has sent from the Texas border since May. He is considering using cruise ships to house the asylum seekers.

Over the weekend, the mayor called out Gov. Abbott and Florida Gov. Ron DeSantis, arguing they’re relocating the migrants as a distraction. He cited their stances on abortion and guns. 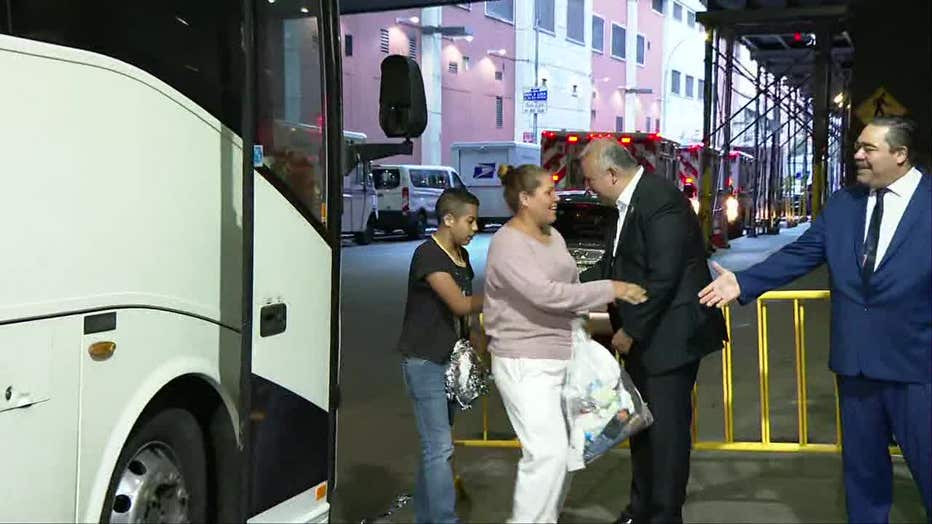 "This is to cover up the erosion of human rights that both those governors have been participating in, and they’re attempting to show other ways they are eroding human rights of individuals even those new arrivals," Adams said on MSNBC’s "The Sunday Show."

"Do any of us like the situation we’re in? Absolutely not. I would suspect the individuals in southern states that are trying to get the attention of the administration would love to have other alternatives too. It’s been 606 days since Joe Biden took office and this problem has done nothing except continue to develop," U.S. Sen. Mike Rounds, a Republican from South Dakota, said on CNN.

Gov. DeSantis and Abbott agree. They argue the Biden administration is failing to deal with the crisis at the border.

Last week, Gov. DeSantis sent asylum seekers to the wealthy vacation island of Martha’s Vineyard in Massachusetts. He said immigration is on the ballot in November.

California’s Democratic Gov. Gavin Newsom challenged DeSantis to a pre-election debate over immigration. Both are seen as potential candidates for president.