Irving police said a group of men used social media to recruit teens into selling drugs for them.

IRVING, Texas - Irving police said a group of men used social media to recruit teens into selling drugs for them.

They announced the results of an investigation that started last year, ending with three men sentenced on federal drug and weapons charges, with a fourth ready to be sentenced this month.

The alleged ring leader, 24-year-old Ricardo Rosas Garcia, was given a 19-year sentence in federal prison, while two of his co-conspirators were sentenced to three and five years. The other will be sentenced later this month.

All of them were charged with conspiracy to possess with intent to distribute controlled substances.

Prosecutors called Garcia the ring leader of a group of men who recruited teenagers on Instagram and other apps to sell drugs and firearms in Irving-area high schools.

"They’re tapping into that group of young adults in a school district with over 30,000 students and they’re trying to use that network to facilitate their greed," Irving Police Department Office Robert Reeves said.

Reeves said the investigation began last year after a tip from a school resource officer.

That prompted an undercover narcotics sting that went on for months, resulting in 14 undercover buys.

"They purchased everything from cocaine, methamphetamines, LSD, THC and other drugs," he explained.

According to court documents, Garcia - who is undocumented - had previously been convicted of three felony drug charges in 2018. He was deported in 2019.

It’s unclear when he returned to the U.S., but he was arrested in August 2020 and charged with felony possession of a firearm after a traffic stop turned into a police chase on foot, ending in a hotel room near DFW Airport.

A gun was found in the car Garcia was driving.

"He went to jail, while he was in jail, he decides to get on that phone there in the jail and start calling his three co-conspirators and starts giving them the account passwords and account information as to how to advertise for the selling of illegal narcotics," Reeves said.

Portillo and Ventura have been sentenced.

Hernandez will be sentenced later this month. 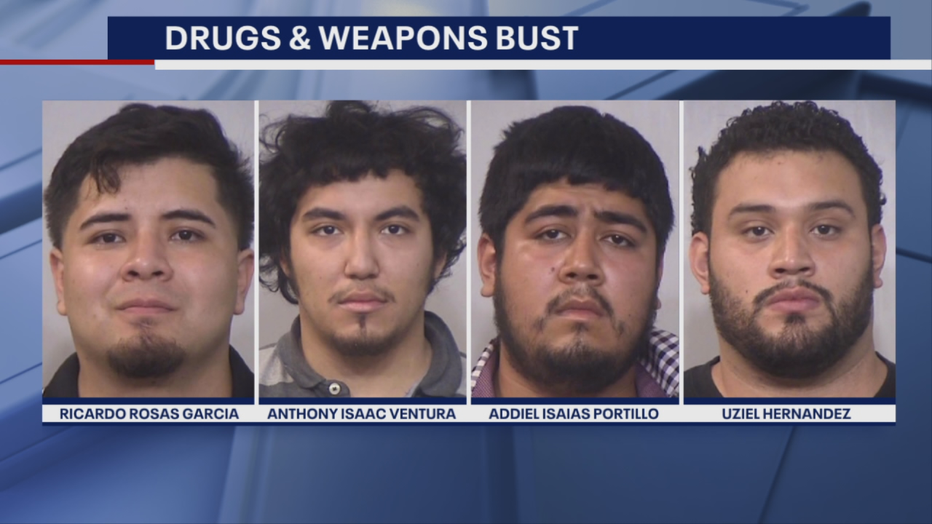 Police said all four have been connected to various violent crimes in Irving, including aggravated robberies and assaults.

According to the DOJ’s Northern District Court of Texas, the group used several social media handles with the name "Ricky Rosas" to recruit and sell drugs.

"It originated in one high school, but it did spread to other high schools within the city," Reeves said.

And even though some recruited by Garcia were minors, one as young as 15 years old, Reeves said they’re not exempt from prosecution.

"If they’re delivering narcotics to someone, they’re going to be picking up charges for that," he explained.

He called it an eye-opener for parents.

"Your child may be a young adult, but they may be getting wrapped up into a lot of trouble," he added.