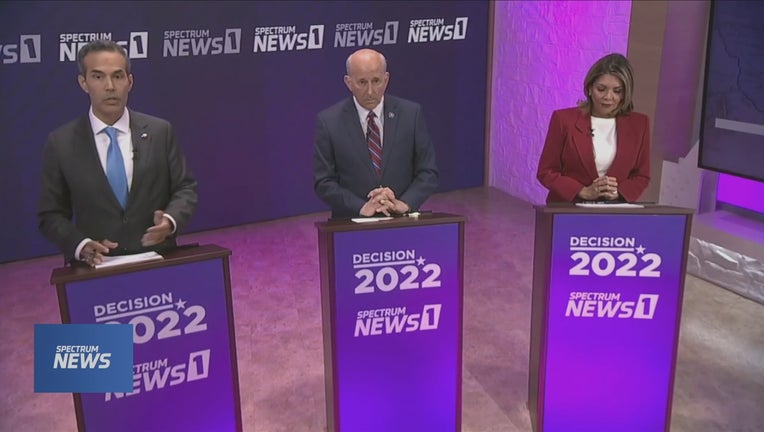 The front-runner for the Republican nomination for Texas Attorney General skipped Thursday night’s debate with the three others who want his job.

Incumbent Ken Paxton did not appear at the debate and that made him a frequent target of the other three candidates.

Texas Land Commissioner George P. Bush, East Texas Congressman Louie Gohmert and former State Supreme Court Justice Eva Guzman are jockeying for what will likely be a second-place finish to Paxton. At best, that would force a runoff in the Republican primary.

Guzman accused Bush of lying and said he does not have the background to be the state’s chief legal officer. Bush called Guzman a "gutter politician."

"Unfortunately, in this campaign it has gotten negative from one of the candidates that is here tonight. Eva Guzman has run a multimillion-dollar attack maligning my character, questioning my track record and, of course, going after my wife. Eva Guzman, you’ve crossed the line," Bush said.

"He’s said that I am not for finishing the wall and he knows. He’s been at every campaign speech, and he knows that has been the bests part of my plan. There is no room in Texas for another lying attorney general," Guzman said.

Meanwhile, Gohmert set his sights on one target – Paxton.

"Why Paxton is not here, why he hasn’t come to any of our events is because he is under indictment for fraud. The motive to dismiss was denied. He’s pending trial. He’s been arrested. He’s out on bond. He’s under investigation by the FBI. He’ll likely be indicted after the primary and we can’t replace him. Look, anything he says can and would be used against him," Gohmert said.

For more information about the candidates or to find out where to vote, visit the FOX 4 News Voters’ Guide.

Election day is on Tuesday, March 1.