The first damage report from the large wildfire in Somervell County shows that more than a dozen homes were destroyed.

GLEN ROSE, Texas - The first damage report from the large wildfire in Somervell County shows that more than a dozen homes were destroyed.

It is called the Chalk Mountain wildfire, and has been burning for two days now and is only 10% contained.

The fire is near the town of Glen Rose, about 50 miles southwest of Fort Worth.

Homeowners, and even livestock, have been evacuated to the county expo center.

As of 3 p.m. Wednesday, the Chalk Mountain wildfire has destroyed 16 homes and damaged five others.

After tripling in size in less than 24 hours, the wind whipped fire has scorched more than a 9-square mile area in Somervell County.

It has prompted a state disaster distinction that releases grant money to help in the fight.

"It’s a new distinction on the fire as of last night. That allows Texas A&M Forest Service to bring in more resources and they’re able to pay other crews to come in from across the country," said Cyndi Smith, with Erath County Emergency Management. 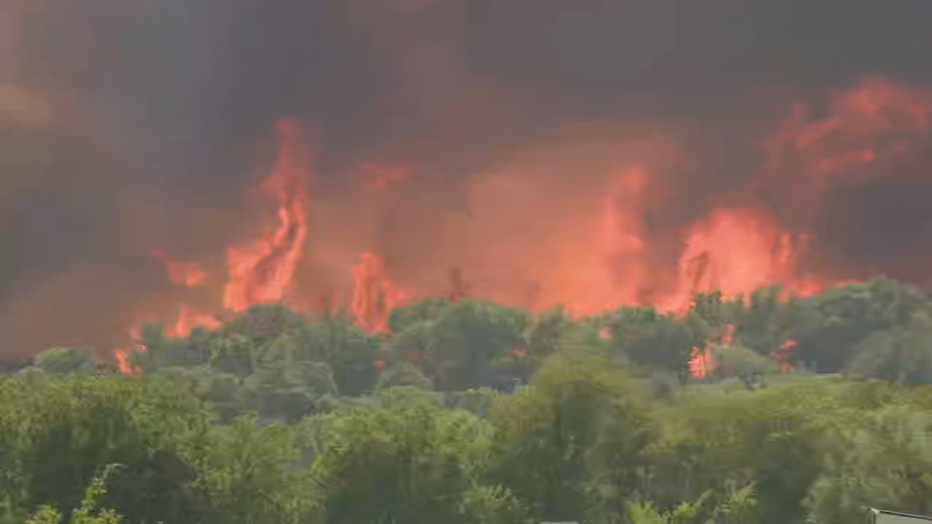 Those engaged in the tough Chalk Mountain wildfire fight have managed 10% containment, though more than 6,300 acres are torched.  It means many animals, like horses, cows and others, are displaced and finding shelter, along with homeowners.

Star cSeay and her family are wondering if they have a home to return to. They left and have been back once to retrieve items. Now, it’s a waiting game.

"Looked like they got it down, then all of a sudden, it just flared right back up," she said. "It was so far away I didn’t even think it was going to get to us. And the more we looked at it, the bigger it got. Firefighters came and told us we needed to evacuate."

Volunteers have mobilized to provide food, water and shelter for those who lost their homes or just had to get out in Somervell County. They're also providing meals for firefighters.

Volunteers have mobilized to provide food, water and shelter for those who lost their homes or just had to get out in Somervell County. They're also providing meals for firefighters.

At the Somervell County Expo Center in Glen Rose, a room full of food, clothing and other supplies is stocked and ready for anyone who needs them.

"They’re just stepping up in any way. Businesses have been feeding the firefighters, feeding the displaced people," she said.

About 30 animals gave been dropped off at the expo center and have found a temporary home. Many of them from nearby ranches and properties because their owners were forced to evacuate."

There’s been compassion from a group of teenagers who feel for those in need. They decided to join their parents and put their love for animals to good use.

"I just wanted to help take care of horses and make sure they were good and had water whatever else they need," one teenager said.

A generation of young helpers happy to spend their time in service of others.