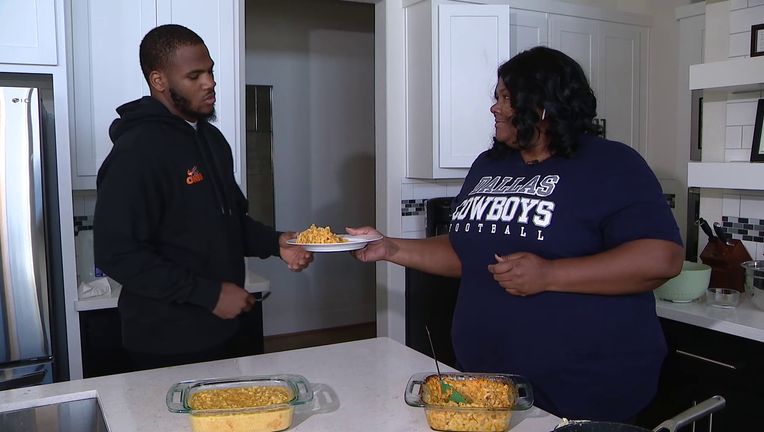 DALLAS - A lot of NFL watchers are calling Cowboys linebacker Micah Parsons a candidate for rookie of the year. It would be no surprise to Micah’s number one fan – his mom, Sherese Parsons.

After he was drafted by the Cowboys, Sherese left her home in Pennsylvania and moved with Micah to a home in Collin County.

That makes it easier for her to go to all his games.

Micah could be the first player in 40 years to win both defensive player and rookie of the year.

"Every chance and opportunity he gets to hit that field he’s going out trying to make plays. He hates to lose. He’s never been on a losing team so he’s going to give it 100% Actually, probably 120% if you let him," Sherese laughed.

One thing helping to fuel Micah’s performance is his mom’s home cooking.

She shared one of her favorite holiday recipes with Good Day FOX 4.

When he's not humiliating quarterbacks, Dallas Cowboys linebacker Micah Parsons enjoys his mom's cooking. She invited Good Day into their home in Collin County where she shared one of Micah's favorite recipes.

Bring a large pot of water to a boil. Add macaroni and cook per packet directions.

Toss in butter. Set aside to cool while making the sauce.

In a large saucepan melt butter over medium heat. Stir constantly, for 1 minute.

Spread final mac ‘n cheese mixture in a 9x13-inch baking dish.  Bake for 30 minutes or until top is golden. Don’t over bake or sauce will bake away.