Meteorologist Evan Andrews gives an update on freezing temperatures and the forecast.

DALLAS - It's the start of "Meteorological Winter," basically the three coldest months of the year. And Dallas’ first official freeze of the season is proof!

The low at DFW Airport was 29 degrees Tuesday morning. While that number could drop a hair more, south winds are already picking up. So that should be about the low of the day. 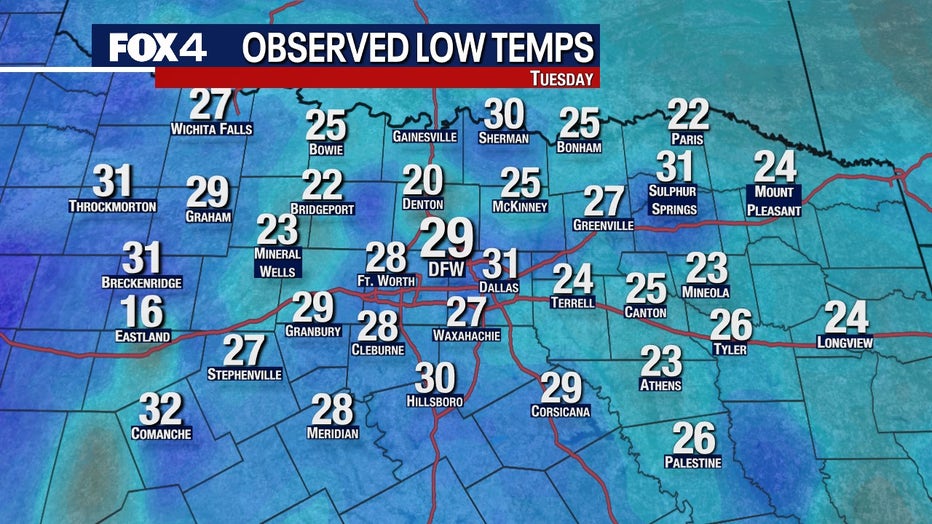 After the cold start, temps will moderate quickly as south winds kick up. While highs will approach normal Tuesday afternoon (near 60), the stronger winds and dry air will make it feel cooler than that. There will also be some mid-high level clouds moving in as well from a developing storm in the Rockies.

This system is rather energetic and will be intensifying as it crosses Texas tomorrow. It will rapidly pull in Gulf moisture with south winds overnight which will erupt into showers in the morning. But it will be moving so quickly that there will be a sharp cutoff behind a cold front by noon.

What this translates to is that areas west of Fort Worth will likely not see much rain at all, while areas east of Dallas could have a couple of hours of decent rain. The immediate Metroplex should see at least some showers. Either way, the clouds will break in the afternoon as gusty northwest winds kick in and drier, very cool air moves in. Highs should stay in the low 50s.

The parent storm will rotate across Oklahoma Wednesday night into Thursday. While they could see a little bit of snow, North Texas will stay dry with brisk northwest breezes and some in and out cloud cover. It will be close to freezing by Thursday morning and likely won't get out of the 40s in the afternoon (normal highs are 60).

As the storm pulls away, winds will diminish Friday. It just looks chilly to end the week with freezing temps to start and more sunshine to finish.

The computer models are in significant disagreement as to the evolution of the weather patterns this weekend and early next week. It appears that either way North Texas should slowly begin to moderate back to December normals with dry air – lows in the 30s and highs upper 50s to low 60s.

North Texas could see some moisture back in after that but it’s too early to worry.

Until then? Stay safe! And warm!