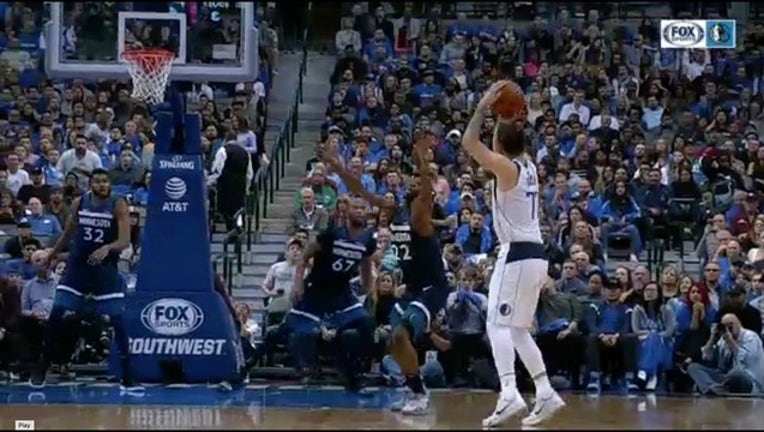 The script flipped in the final seconds.

Doncic scored 26 points after a rough start in the No. 3 overall pick's first home game, Smith converted a tiebreaking three-point play with six seconds left and the Mavericks beat the Minnesota Timberwolves 140-136 in a wild offensive game Saturday night.

"We're going to have ups and downs," said center DeAndre Jordan, who had 22 points, 10 rebounds and five blocks in his first game in front of the fans who used to boo him unmercifully after the Texas native backed out on a pledge to join Dallas in free agency three years ago.

"We've got young guys with high character and poise with good basketball IQs. Dennis stuck with it tonight and he ultimately made a play that won us the game."

The Timberwolves didn't seem to miss Jimmy Butler much after letting the disgruntled guard stay home to rest a night after he scored a team-high 33 points in their first win. Minnesota matched the most points Dallas has given up in a first quarter while taking a 46-37 lead.

But a 15-point Minnesota lead in the first quarter was gone before halftime in a game with nine lead changes in the second half. And the Mavericks mostly canceled out the Wolves' big first quarter with 43 points in the fourth.

A 19-year-old who is the second-youngest ever to play for the Mavericks, Doncic kept Dallas ahead in the closing minutes by twice backing down for baskets over Derrick Rose, who had 28 points in his highest-scoring game since late in the 2016-17 season.

After Karl-Anthony Towns hit an off-balance 3 on his way to 31 points to help the Timberwolves get close and Taj Gibson made a jump-hook in the lane to pull them even with 27 seconds left, Smith made Rose the defensive victim again.

Smith - a 20-year-old and the third-youngest to play for the Mavericks after making his debut as a teenager this time last year - hit a jumper just inside the 3-point line over Rose and drew the foul. The free throw put the Mavericks up 137-134.

Smith scored 10 of his 19 points in the fourth quarter, including the last six for Dallas.

"We just have to play defense," Rose said. "It seemed like everyone I was covering tonight made a tough shot on me and I just have to do a better job of contesting shots."

Doncic, the No. 3 overall pick and second-youngest to play in a game for the Mavericks, bounced back from a slow start and finished 8 of 16 from the field and 4 of 9 from 3-point range two nights after a fairly rough NBA debut in a loss at Phoenix.

With 40-year-old fellow European Dirk Nowitzki watching from the bench in a light blue suit while dealing with an ankle issue, Doncic missed his first three shots and quickly committed two of his game-high six turnovers.

But Doncic sparked a flurry of 15 points in the final 6:41 of the second quarter with a floater that drew a foul, although he missed the free throw. He poked away a loose ball and hit a second straight 3-pointer to give the Mavericks their first tie at 54-all.

The Mavericks took their first lead at 62-61 in the second quarter on Jordan's layup on an alley-oop pass from J.J. Barea, who finished with 11 assists.

The Timberwolves had to make two trips to Texas in a three-day span, part of the reason for sitting Butler so early. They opened with a loss at San Antonio before beating Cleveland on Friday night. "It was a tough turnaround for us," coach Tom Thibodeau said. "You get in late and you have to come with energy. I liked the energy to start the game."

Timberwolves: The Timberwolves shot 63 percent while building their first-quarter lead. ... Jeff Teague had 22 points and a team-high nine assists. ... Andrew Wiggins scored 19 before fouling out in the final seconds.

Timberwolves: Indiana at home on Monday.

Mavericks: Chicago at home on Monday.