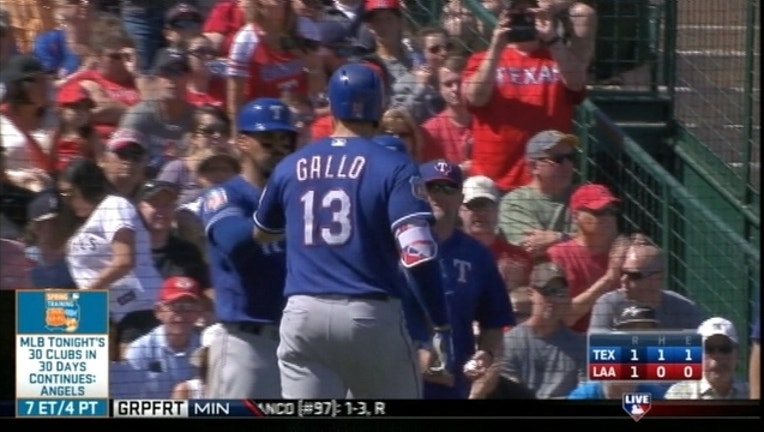 Gallo, a promising slugger, and right-hander Nick Martinez were brought up before Tuesday night's game against Oakland, and both were starting against the Athletics. Veteran right-hander Kyle Lohse was designated for assignment and outfielder Jared Hoying was optioned to Round Rock.

Manager Jeff Banister said Gallo provides a big left-handed bat with power potential in the lineup that is without Prince Fielder (pending neck surgery) and Shin-Soo Choo (lower back inflammation).

Gallo was hitting sixth and playing first base in his return. He was with the team for four games in late May and had a flyout as a pinch-hitter in his only action. He hit six homers in 36 games last season for the Rangers.

Martinez (1-2, 6.45 ERA) was recalled to make his first start for the Rangers since July 4 at Boston. The right-hander had been optioned to Round Rock soon after that when the 37-year-old Lohse was brought up from the minors, but Martinez replaced the struggling veteran in the rotation.

Lohse lost both his starts and had a 12.54 ERA for Texas since being called up just before the All-Star break. He allowed 15 hits and 13 runs in 9 1/3 innings with three strikeouts and five walks for the Rangers, after going 2-5 with a 5.06 ERA in 10 starts for Round Rock.

Hoying hit .241 with five RBIs in 17 games over two stints with the Rangers this season. He also pitched an inning July 8 against Minnesota.

The Rangers also transferred outfielder Drew Stubbs (left little toe sprain) from the Arizona League to Round Rock to continue his injury rehab assignment, and outfielder Justin Ruggiano was released from his minor league contract with Round Rock. He was on the Rangers' opening day roster, but played only one game before getting designated for assignment and outrighted to Round Rock on April 10.