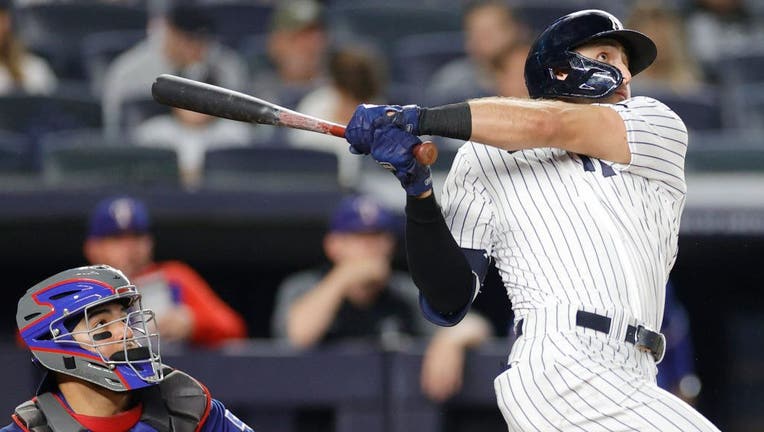 NEW YORK, NEW YORK - SEPTEMBER 21: Joey Gallo #13 of the New York Yankees hits a solo home run during the sixth inning against the Texas Rangers at Yankee Stadium on September 21, 2021 in the Bronx borough of New York City. (Photo by Sarah Stier/Gett

NEW YORK - Giancarlo Stanton lined a laser beam of a home run, Aaron Judge added a three-run shot and the New York Yankees powered past the Texas Rangers 7-1 on Tuesday night to keep pace in the crowded AL wild-card chase.

Joey Gallo also went deep — against his former team — and a finally healthy Luis Severino closed with two shutout innings in his first major league appearance since the 2019 AL Championship Series. New York, which remained a half-game behind Toronto for the final American League playoff spot, has taken two straight from last-place Texas following a 7-15 stretch.

Jordan Montgomery (6-6) struck out six in 5 2/3 innings of one-run ball, giving up one or less for the eighth time in his last 10 starts. Anthony Rizzo had an RBI single and scored both times after he was hit by a pitch.

Stanton drove in a run with a broken-bat groundout in the first and then ripped a solo homer inside the left field foul pole off starter Dane Dunning (5-9) in the third.

The ball left Stanton’s bat at 118.5 mph, the third-hardest-hit home run in the majors this season.

Gallo, traded by Texas to the Yankees in July, lofted a high drive into the second deck in right to make it 4-1 in the sixth. Judge, who doubled earlier, sent an opposite-field drive to right-center against Kolby Allard in the mist for his 36th homer in the seventh.

Yankees reliever Michael King retired cleanup batter Adolis Garcia with a runner on second to keep it 3-1 in the sixth and then struck out all three batters in the seventh looking.

Severino, reinstated from the injured list Monday, entered to a warm hand in the eighth from fans who also chanted his name. He gave up two hits and struck out two, flashing a mid-90s mph fastball and a sharp slider.

A two-time All-Star, the 27-year-old right-hander had Tommy John surgery on Feb. 27, 2020, and was slowed throughout his rehab progression in the minors this season by a groin injury and shoulder tightness.

Wearing a Yankees cap and pinstriped jersey, late-night talk show host Jimmy Fallon threw out the ceremonial first pitch — accompanied at the mound by Hall of Fame closer Mariano Rivera. The two then embraced and autographed a baseball that Fallon tossed into the stands.

Rangers: RHP Matt Bush, out since early April with elbow inflammation, threw 15 pitches Monday night in his first rehab outing for Triple-A Round Rock. He is scheduled to pitch again Thursday.

Yankees: Setup man Jonathan Loaisiga (right shoulder strain) played catch from 120 feet and could throw a bullpen Friday. The team hopes to get him back by the end of the season. ... Judge received a bit of a breather as the DH, with Stanton starting in right field.

Rangers right-hander Kohei Arihara was assigned outright to Triple-A Round Rock and is expected to start for the Express this weekend against Tacoma.

The 29-year-old Arihara is due $3.6 million next year in the second season of a $6.2 million, two-year contract. Texas also paid a $1.2 million posting fee to bring him over from Japan. He had surgery in May for an aneurysm in his pitching shoulder and was 2-4 with a 6.64 ERA in 10 starts for the Rangers this season.

In the series finale Wednesday night, Yankees RHP Corey Kluber (5-3, 3.68 ERA) faces the rookie-laden Rangers for the first time since pitching a no-hitter against them May 19 in Texas. The only baserunner he allowed in that game came on a four-pitch walk to Charlie Culberson in the third inning.

This will be Kluber’s second consecutive outing against a former team, after going six innings last Friday in an 8-0 win over Cleveland, with whom he won a pair of Cy Young Awards. Kluber pitched one inning last year in his lone season with Texas and tore a muscle in his shoulder.

LHP Taylor Hearn (6-5, 4.52) makes his Yankee Stadium debut in his 10th start and 41st appearance for the Rangers this season.