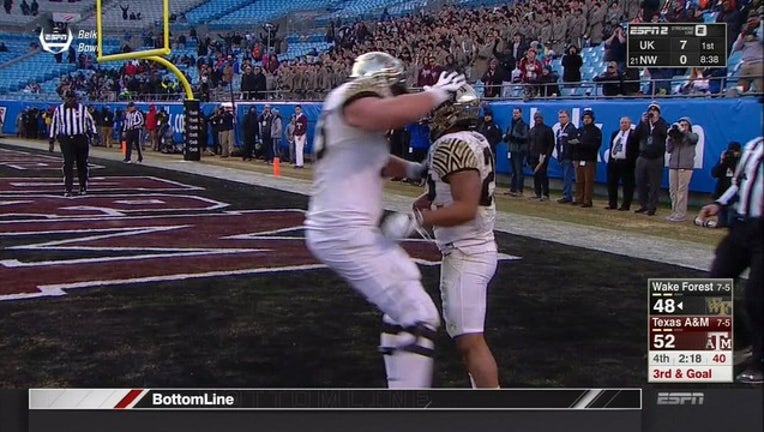 CHARLOTTE, N.C. (AP) - John Wolford threw for 400 yards and four touchdowns, and Matt Colburn ran for 150 yards and the go-ahead score in Wake Forest's 55-52 victory over Texas A&M on Friday in the Belk Bowl.

The teams combined for 1,260 yards and 107 points, making it one of the highest-scoring games in bowl history.

Wolford, a four-year starter and the game's Most Valuable Player, threw all four TD passes in the first half for Wake Forest (8-5). Colburn had a 1-yard touchdown with 2:18 left in the game to give the Demon Deacons the lead for good.

Wake Forest's defense stopped the Aggies on downs on their final drive to seal the win, which was no easy task considering Texas A&M's potent offense. Aggies quarterback Nick Starkel threw for a Belk Bowl-record 499 yards and four touchdowns - three of those to wide receiver Christian Kirk, who caught 13 passes for 189 yards.

"It was a crazy game" Wolford said. "We got up early and then fell behind. But I never had a doubt. This team has been through a lot, so a close game wasn't going to faze us. And we got it done. That is what mattered most."

Wake Forest coach Dave Clawson said he had a feeling it would be a shootout.

"I thought it would be a high scoring game," Clawson said. "I told our offensive coordinator before the game, 'Go fast. I don't know how much it's going to take. ... Keep your foot on the gas.' This game was going to come down to whoever could outscore the other team."

Wake Forest spotted Texas A&M (7-6) a 14-point first quarter lead following a pair of special teams miscues, but rattled off 31 straight points in a span of 11 minutes, 16 seconds to take a 31-14 lead in the second quarter.

But Texas A&M battled back to take the lead late in the third quarter behind two Starkel and Kirk.

"After that first quarter, it felt like an old Western Athletic Conference shootout," said Texas A&M interim coach Jeff Banks. "We wanted to stay positive with the kids and not get down on them. They were starting to get down in the first half. We got down three scores, and I was like, 'guys, there's nine minutes left in the second quarter.' We're going to get this back and get it to a one-score game."

Texas A&M: You would have to think Kirk will think strongly about heading to the NFL after a terrific bowl game. It's hard to believe he could do much more to impress the NFL scouts after an unbelievable performance.

Wake Forest: The most difficult task next offseason will be replacing Wolford, a four-year starter and the clearly the leader of the team.

Texas A&M: The Jimbo Fisher officially begins as the Aggies usher in a new era after six seasons under Kevin Sumlin.

Wake Forest: The future is looking bright for the Demon Deacons after their second bowl win in as many years under coach Dave Clawson.