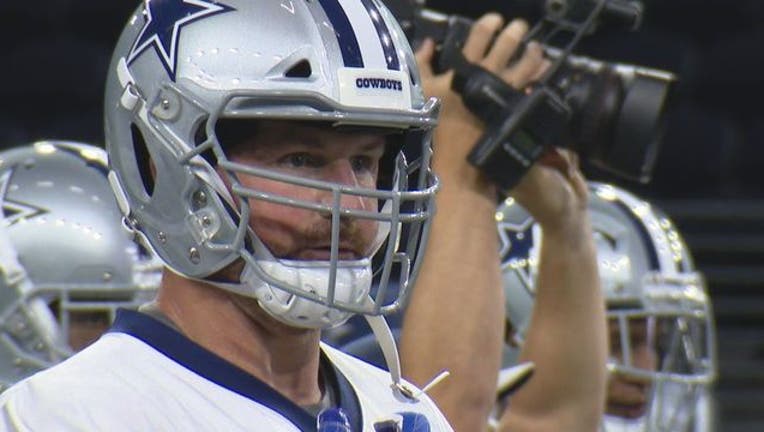 OXNARD, Calif. (AP) - Upon further review, Jason Witten's snazzy one-handed catch in the back corner of the end zone wasn't a touchdown, because he apparently bobbled the ball while he was trying to get his second foot down.

But hey, there's no replay in training camp. And whether it counted was beside the point for the tight end who came out of retirement and is poised to set the club record with a 16th season for the Dallas Cowboys.

Witten believes he can still play at 37, and is looking for any chance to show it. Before the catch that apparently wasn't, Witten had another nice grab for a TD that did count, which set up a couple of declarations after the sixth practice of camp.

"Just an old guy trying to make a play here and there," Witten said Friday - and then was asked how much he was enjoying his return to training camp, the part of the year players generally dread the most.

"This isn't just to come out here and be a cheerleader and ride off into the sunset," he said. "It's to help this team win games in whatever way I can. That's why I'm enjoying it."

Witten's return after a year in the "Monday Night Football" TV booth came with talk of a reduced role for an 11-time Pro Bowler who took nearly every snap in his first 15 seasons with the Cowboys.

He also has made a point of deferring to others when talk turns to leadership. It's just hard to get around what Witten brings in terms of experience when the next-oldest tight end on the Dallas roster is 11 years younger.

"There's so many things that, whether it be active or passive, that I've taken from his game in the last few months," said 22-year-old Dalton Schultz, in his second season. "The influence that he's had on the room so far is pretty heavy."

It's spilling over to the defense, too. Third-year safety Xavier Woods was a rookie when Witten was still around two years ago - but never got to go one-on-one against him in practice. The first chance finally came early in this camp.

"I was waiting, to be honest," Woods said. "When he called my name, I couldn't wait. I was relishing that moment."

Yes, even the defensive backs - another generally young group for the Cowboys - can learn plenty from the franchise leader in catches (1,152) and yards receiving (12,448).

Witten and Tony Gonzalez are the only tight ends in NFL history with at least 1,000 catches and 10,000 yards.

"I want to compete with a Hall of Famer," Woods said. "He knows the route-running. He knows everything. ... He knows all the push-offs and everything you can have."

When camp opened, Witten said again he was trying to avoid the hoopla associated with his return. He has repeatedly acknowledged skeptics who wonder whether someone his age can be what they were after taking a year off.

The circus catch that got plenty of attention on Twitter allowed Witten to change the tone, at least for now.

"I think the biggest reason why I love it is I see myself improving and getting better," he said. "There's a lot of things I've still got to clean up in football and technique. I know I can do this. I know I can do it at the level I expect to do it."

Witten consulted with coach Jason Garrett at length when deciding whether to accept the TV offer. The two have been close since Garrett joined the staff as offensive coordinator for Witten's fifth season in 2007, so Garrett knew how difficult the decision was.

Because of that, Garrett expected to see the same Witten - and says he has.

"I think it was hard for him to step away when he knows he had more meat left on the bone," Garrett said. "I think he listened to his heart, listened to his gut and made a hell of decision, I think for himself and for our football team. Excited to have him back."

Witten finally had his first chance to show his excitement - dancing a little jig after one of the two catches that had everybody buzzing.

"That was a lot of fun," he said. "I bring a different perspective, and that's part of it. You've got to be able to smile and make plays like that. That's why you want to play, is experience that with your teammates right there."

NOTES: Five-time Pro Bowl RG Zack Martin has irritation in a disk in his back and will miss at least several days of practice. It's possible he won't return to workouts before the first preseason game at San Francisco on Aug. 10. ... LB Sean Lee has been out almost a week with what Garrett says in a minor knee issue.