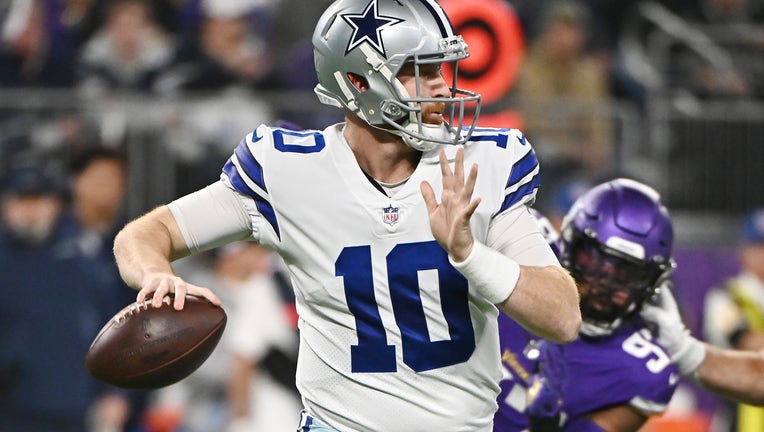 MINNEAPOLIS, MINNESOTA - OCTOBER 31: Cooper Rush #10 of the Dallas Cowboys looks to pass against the Minnesota Vikings during the first quarter at U.S. Bank Stadium on October 31, 2021 in Minneapolis, Minnesota. (Photo by Stephen Maturen/Getty Images

With every opportunity to outlast the fill-in for the first-place team on the other side, Kirk Cousins and the Minnesota Vikings withered down the stretch.

Rush subbed for the injured Prescott and passed for 325 yards and two second-half touchdowns, the last a 5-yard throw to Amari Cooper with 51 seconds left in the Cowboys' 20-16 victory over the Vikings on Sunday night.

"It was just as good as the dream," Rush said.

Rush, the fifth-year backup handed the offense when Prescott was shelved in a game-time decision due to a strained right calf muscle, directed an eight-play, 75-yard drive he finished with a perfect toss to Cooper on a fade in the corner of the end zone.

"I was glad everybody got to see that, because that's Cooper Rush," coach Mike McCarthy said. "He plays the quarterback position like a seasoned veteran."

Cooper had eight catches for 122 yards, and CeeDee Lamb had six receptions for 112 yards for the Cowboys (6-1), whose only lead came in that final minute. Rush connected with Cedrick Wilson for a 73-yard score on the third play of the third quarter to tie the game at 10.

"Trust the matchups on the outside," Cooper said he kept telling Rush. "These guys can't guard us."

Rush overcame two turnovers, both delivered by former Dallas safety Xavier Woods, to slice up the Minnesota secondary as Prescott watched approvingly from the sideline.

Kirk Cousins and the Vikings (3-4) were frequently in disarray on offense, after opening the game with 75-yard march for a touchdown pass to Adam Thielen. Greg Joseph kicked three field goals to keep them in front for most of the night, but the Vikings totaled only 278 yards against a defense that was allowing the second-highest yards-per-play average in the NFL entering the week.

Cousins finished 23 for 35 for 184 yards, too often settling for the short dump-off option rather than pushing the ball up the field to Thielen and fellow star Justin Jefferson. Dalvin Cook had 18 carries for 78 yards, but he never found a rhythm because of all the fits and starts.

The Vikings converted only one of 13 third downs and had eight of 12 possessions last only five plays or fewer. Woods had an interception in the second quarter and forced a fumble with his first career sack in the fourth quarter, but the Vikings didn't score after either of those gifts.

"It was a combination of coverage and pressure," Cousins said.

Cowboys defensive coordinator Dan Quinn had a masterful game plan that was nearly undone by a lack of discipline by his group. The defense accounted for nine of the team's 11 penalties, including three unnecessary roughness calls during the 69-yard drive by the Vikings to take the lead on Joseph's 24-yard kick. Nearly half of those yards came from penalties. 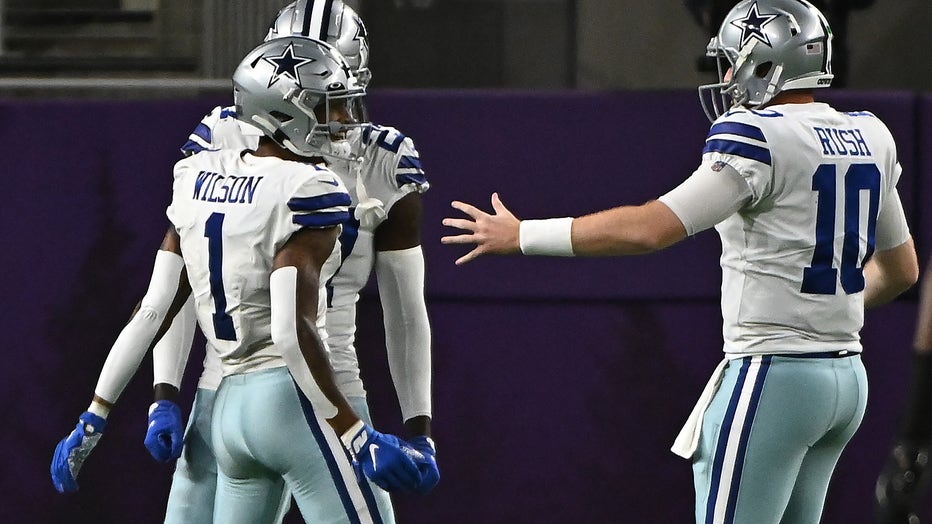 MINNEAPOLIS, MINNESOTA - OCTOBER 31: Ced Wilson #1 and Cooper Rush #10 of the Dallas Cowboys celebrate a 73-yard touchdown against the Minnesota Vikings during the third quarter at U.S. Bank Stadium on October 31, 2021 in Minneapolis, Minnesota. (Pho