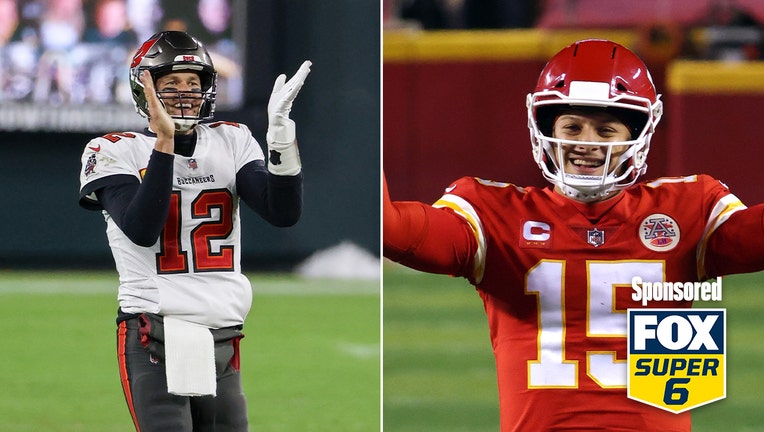 LEFT: Tom Brady #12 of the Tampa Bay Buccaneers celebrates in the fourth quarter against the Green Bay Packers during the NFC Championship game at Lambeau Field on January 24, 2021 in Green Bay, Wisconsin. (Photo by Dylan Buell/Getty Images) RIGHT: P

When the curtain drops on Sunday night, a story for the ages will have been written by either the Tampa Bay Buccaneers or the Kansas City Chiefs.

Tampa quarterback Tom Brady could be hoisting the Vince Lombardi Trophy for the seventh time in his career, the first time without New England coach Bill Belichick sharing the platform with him and the ultimate example of not being as old as your age would dictate.

Or it could be Chiefs’ QB Patrick Mahomes joining Brady, John Elway, Troy Aikman, Joe Montana, Terry Bradshaw, Bob Griese and Bart Starr as quarterbacks who have won back to back championships.

There are many things about the Super Bowl that brings us together. But ultimately, it is about the spectacle and the story. And this time around, it could also win you $250,000 on FOX Bet’s Super 6 jackpot for the ultimate event in American sport on Sunday evening (6:30, CBS) at Raymond James Stadium in Tampa.

All you have to do is download the FOX Super 6 app, answer all six questions correctly and you can win $250,000. The best part is it’s all free.

Here are the six questions that could win you serious money.

Brady completed 20 of 36 in the Bucs’ 31-26 win over the Packers in the NFC Championship game. The lowest total of completions that Brady has in his nine previous Super Bowls came in his first one, when he completed 16 against the Rams in Super Bowl XXXVI.

The snap judgment in most cases would be to take the Chiefs on a question like this with Mahomes, Travis Kelce, Tyreke Hill and other weapons. But during the season, the Buccaneers numbers for receptions were close – 420 receptions for Kansas City, 410 for Tampa. And that’s with the fact that it took a while for Brady and his weapons – Chris Godwin, Mike Evans, Rob Gronkowski, Scotty Miller and the now-injured Antonio Brown- trying to get on the same page.

The wild card in this category could be Leonard Fournette, who has come alive for the Buccaneers in the playoffs and is the type of runner who could be a problem for Kansas City’s linebacker corps with his physical running ability. Clyde Edwards-Helaire has battled injuries, so Darrel Williams figures to be the Chiefs running back who could get the biggest load.

Just like the most receptions question, it isn’t going to be as easy as you think. But Hill had a huge game against the Bucs in Week 12’s 27-24 win that saw him catch 13 passes for 269 yards and three touchdown passes. The Chiefs threw for 456 that day against the Bucs defense. It is likely to be a similar attack this time.

The Bucs are a lot better than they were at the end of November on both sides of the football and they have a ton of intangibles going for them- Brady’s Super Bowl history, not having to spend the week in a hotel bed, virtually all the pressure being on Kansas City. And yet, the Chiefs are that good. They’ve lost one game that matters since last November. That means something. Another close one looks on tap, but it looks like another Chiefs win.