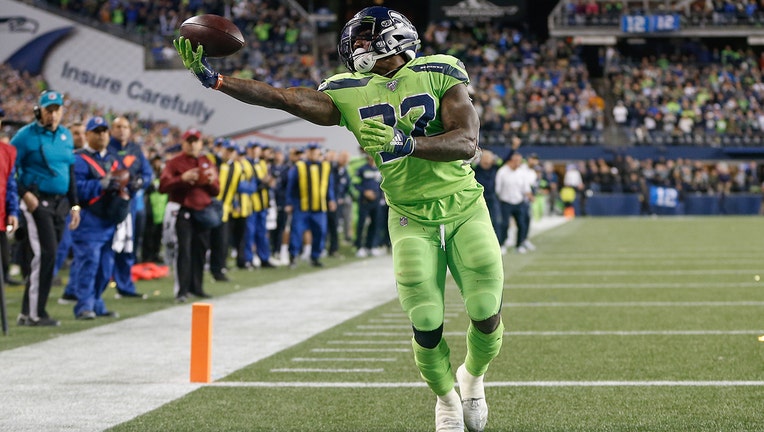 Running back Chris Carson #32 of the Seattle Seahawks makes a touchdown catch in the fourth quarter against the Los Angeles Rams at CenturyLink Field on October 3, 2019 in Seattle, Washington. (Photo by Otto Greule Jr/Getty Images)

SEATTLE (AP) - Russell Wilson threw a 5-yard touchdown pass to Chris Carson on fourth-and-goal with 2:28 remaining to give Seattle the lead, Greg Zuerlein missed a 44-yard field goal with 11 seconds left and the Seahawks held on for a wild 30-29 victory over the Los Angeles Rams on Thursday night.

Jared Goff and the Rams (3-2) appeared on the verge of a victory after driving into field-goal range in the final 90 seconds. Zuerlein hit three field goals earlier, but this attempt slipped wide right and gave Seattle (4-1) a win it needed against its NFC West foe after losing six of the past eight to the Rams.

Wilson was 17 of 23 for 268 and four touchdowns. He was at his best, whether it was his throws from the pocket or when he was forced to improvise. It was one stunning play after another from Seattle’s star, continuing the best start to a season in his career.

Seattle appeared to wrap up the victory when Tedric Thompson made a juggling interception of Goff’s deflected pass while lying on the turf with 2:08 left. But the Rams forced Seattle to punt and took possession at their own 7 with 1:38 left.

In just seven plays, Goff had the Rams to the Seattle 30 after a 28-yard strike to Gerald Everett. The Rams stalled and a 9-yard pass to Everett on third-down set up Zuerlein’s attempt. The snap was good, but the kick stayed just to the right.

Goff finished 29 of 49 for 395 yards and one touchdown just days after throwing for a career-high 517 yards and tying an NFL record with 45 completions in a loss to Tampa Bay. Everett had seven catches for 136 yards, and Cooper Kupp had nine grabs for 118 yards and a TD.

Wilson, though, was the star.

Wilson had touchdown passes of 13 yards to Tyler Lockett and 40 yards to DK Metcalf in the first half. He threw a 10-yarderto David Moore in the third quarter and he had a final answer after the Rams’ had taken a 29-24 lead.

Wilson led Seattle 60 yards in 12 plays, helped during the drive by a roughing-the-passer call on Clay Matthews. After stalling inside the 10, Seattle faced fourth down at the 5. Wilson scrambled like he had all night, buying enough time to find Carson open in the corner of the end zone. The running back scared nearly all of the 69,000 in attendance by juggling the pass before gaining control.

Carson finished with 118 yards rushing on 27 carries. The touchdown was his only reception.

Todd Gurley was a featured part of the Rams’ offense early and finished with 51 yards on 15 carries, but the run game vanished during most of the second half.

Gurley also fumbled for the first time since Week 3 of last season. The fumble was ripped out by Jadeveon Clowney, who also recovered the ball. It was Gurley’s first fumble in 338 offensive touches. He had gained 1,915 yards from scrimmage and 20 touchdowns between his two fumbles.

Brandin Cooks had just one reception but it was a big one. Cooks pulled in a 29-yard catch from Goff on third-and-8 from the Rams 27 early in the fourth quarter as he was being covered tightly by Shaquill Griffin.

Cooks was being evaluated for a concussion after the play and did not return. Carroll challenged there should have been offensive pass interference but the call on the field stood. The catch led to Zuerlein’s field goal that gave the Rams a 29-24 lead.

D.J. Fluker suffered a hamstring injury in the first quarter. He was replaced at right guard by Jamarco Jones, who typically is a backup tackle, but was forced to play guard with normal backup Ethan Pocic out because of a back injury.

Seahawks: Seattle is at Cleveland on Sunday, Oct. 13.