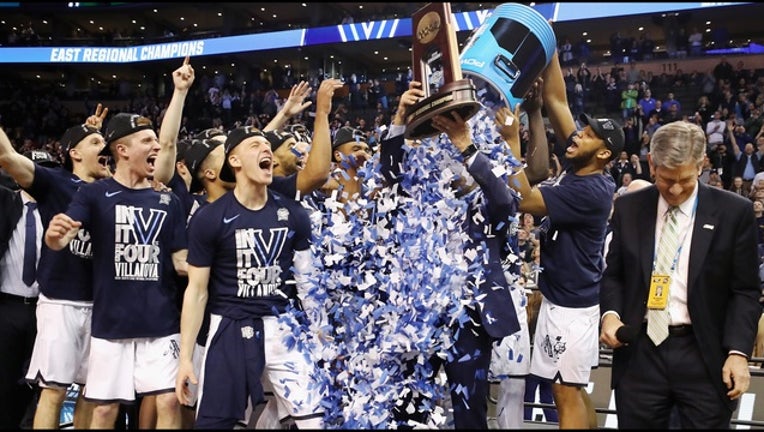 Villanova celebrates after defeating Texas Tech 71-59 in the 2018 NCAA Men's Basketball Tournament East Regional to advance to the 2018 Final Four at TD Garden on March 25, 2018 in Boston, Massachusetts. (Photo by Elsa/Getty Images)

BOSTON (AP) - With all of the underdogs and upsets that have upended the NCAA tournament, no one has managed to come close to Villanova.

The 2016 national champions are headed back to the Final Four, thanks to a fourth straight double-digit victory in a month of March where they've played every bit like the No. 1 seed they earned.

"This tournament's a crazy tournament. Anybody can beat anybody," guard Jalen Brunson said after the Wildcats beat Texas Tech 71-59 in a cold-shooting East regional championship on Sunday to send Villanova back to the Final Four for the second time in three years.

"The underdog mentally, they may have it. But, honestly, they believe they're good. That's why they're in that position. That's (also) why we're in that position," Brunson said. "We're a good team, and we believe we can keep getting better."

The Wildcats (34-4) will play fellow No. 1 seed Kansas, which beat Duke 85-81 in overtime later Sunday. They will join 11th-seeded Loyola-Chicago and its telegenic nun , along with No. 3 seed Michigan in the national semifinals on Saturday in San Antonio.

"I very much look forward to meeting Sister Jean," said the Rev. Rob Hagan, the priest on the Villanova bench. "I was 12 years of Catholic School and taught by the nuns. I have great respect for the Nuns. Usually what Sister says is what goes."

But if these two Catholic schools - one Jesuit, one Augustinian - meet in the national championship game, the Wildcats won't be without spiritual support of their own.

"He's our rock," said guard Donte DiVincenzo, who scored eight points. "He keeps us level-headed to make sure we don't get too high or too low. So to be able to share that moment with him was actually real fun."

Eric Paschall had 12 points and a career-high 14 rebounds, Brunson scored 15, and DiVincenzo also had eight of the Wildcats' season-high 51 rebounds. After starting four guards, Texas Tech (27-10) grabbed just 33 boards and shot just 18 free throws compared to 35 for Villanova to miss a chance to play for a championship in its home state.

"We knew they were a great 3-point shooting team and talented players, but we also knew how tough they were," Texas Tech coach Chris Beard said. "We knew the identity of their team was the toughness and physicality, and that proved to be true."

The teams matched each other with 33 percent shooting from the floor - Villanova's lowest since 2015- and the Wildcats made just 4 of 24 from beyond the arc. One of the most prolific 3-point shooting teams in NCAA history, they need seven to set a Division I single-season record.

They'll get that chance in the Final Four.

"Wasn't really a pretty offensive game. But we played pretty good defensively too," said Villanova coach Jay Wright, whose team spent eight weeks in two different stints as the No. 1 team in The Associated Press Top 25 this season.

Texas Tech star Keenan Evans scored 12 points for the Red Raiders, and revealed after the game he has been playing with a broken toe since injuring his foot in mid-February against Baylor.

"We take a lot of pride just knowing that the amount of work we put in to get here," Evans said. "We came short of what the ultimate goal was, but just for us digging down and us going through injuries ... we took a lot of pride with it."

Texas Tech had never reached the Elite Eight in the 93-year history of the program but easily handled Purdue in the Sweet 16.

It's Villanova's third trip to the Final Four in Wright's tenure; in 2009, they also advanced from the Boston regional before losing in the national semifinals. Four players remain from the team that won it all two years ago.

"You just see how together we are. Every Villanova team I've been on has been like that," Brunson said. "Every time you get to do it is special, every time you're on that court with those group of guys, it's special."

Villanova quickly fell behind 7-0 and trailed 9-1 - the largest deficit the Wildcats had faced in the tournament. But they scored 14 of the next 18 points to lead and closed the half on a 35-14 run for a 36-23 lead at the break. The 23 points was the lowest-scoring half of the season for the Red Raiders.

After falling behind by as many as 15 early in the second, Texas Tech got within eight points with under seven minutes remaining, and made it 52-47 on Brandon Francis' 3-pointer with 6:06 left. They nearly cut it to three points when Evans found Zach Smith in the lane, but Paschall blocked him and sparked a fast break that ended with Phil Booth's basket at the other end.

Texas Tech made only two baskets from there. Villanova had only one in the last three minutes but made its last 12 free throws.

Brunson finished with only four assists, but he had the ball in his hands for much of Villanova's possessions and didn't seem troubled by the defense.

Beard compared them to the Showtime Los Angeles Lakers that played across the way in the old Boston Garden.

"It was like watching Magic Johnson back down. They've got (Michael) Cooper in one corner," Beard said. "He's a multi-dimensional player. He can play at the next level for a lot of reasons. I think his toughness and intangibles ... are at the top of that list."