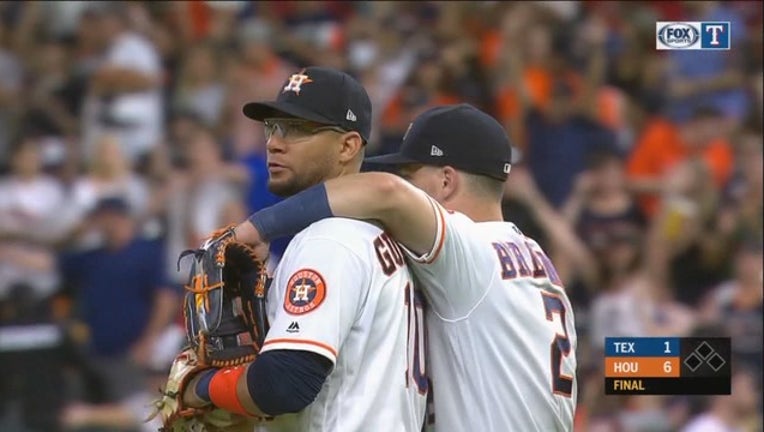 HOUSTON (AP) - After two rough starts for the Astros earlier this month, José Urquidy worked on a few adjustments.

Whatever he adjusted worked in a big way Saturday night.

Urquidy just found out Friday that he would be pitching a day later.

"I knew that I had to focus on this start, and I'm really happy that I was able to execute what I envisioned," he said.

Making his third career start, Urquidy (1-0) held the Rangers to two baserunners - a homer by Shin-Soo Choo and an infield single by Hunter Pence. The 24-year-old rookie right-hander from Mexico struck out nine.

"No walks, one homer - just an incredible, incredible performance," Astros manager AJ Hinch said. "We absolutely needed it. We needed him to go as long as he could, and for him to be effective in that, it's a great day."

Hinch commended Urquidy's creativity with his changeup, his cutter to left-handed hitters and sweeping sliders to righties.

Tony Kemp also homered as Houston, the AL West leader, won its fourth straight and handed Texas its sixth consecutive defeat. Rangers manager Chris Woodward said he might address his team Sunday to urge the importance of staying together.

Urquidy retired his first nine batters before Choo's homer to center field in the fourth. Then he set down the next 11 hitters until Pence's single in the seventh.

Houston put together a two-out rally in the fifth that started with singles from Michael Brantley and Yordan Alvarez, setting up Gurriel's homer to left-center. It was Gurriel's 18th of the season, matching his career high.

Gurriel has 13 home runs in his last 21 games and has gone deep in five straight at Minute Maid Park, matching the ballpark record set in 2006 by Morgan Ensberg.

For a fourth consecutive game, the Astros scored in the third inning. After hitting three successive homers in Friday night's 4-3 victory, Houston had three doubles in four at-bats, with Myles Straw, George Springer and Brantley finding the gaps for a 2-0 lead.

Kemp added a solo shot in the sixth to make it 6-1.

"I'm just trying to put up some good swings and it paid off there at the end," Kemp said. "This team is rolling right now. Hopefully, tomorrow we can get a sweep."

"In that fifth inning, I threw one pitch and it was three runs," Jurado said. "It was only one pitch."

Rangers: C Isiah Kiner-Falefa (right middle finger) was activated off the injured list and optioned to Double-A Frisco. ... LHP Joe Palumbo will not rejoin the rotation Monday as expected after experiencing ankle tendinitis. "That hurt a little bit because I was looking forward to seeing Joe," Woodward said. "Not that he won't be back in a week or two at the max I guess."

Astros: SS Carlos Correa (ribs) continued his rehabilitation assignment with Triple-A Round Rock. Correa, on the 60-day injured list, can't be activated until July 26. ... INF Aledmys Díaz (hamstring) continued his rehab assignment with Double-A Corpus Christi, playing first base and left field, Hinch said. "We hope it's over the next couple days as he plays a few more games or even one game or see if he needs more. For him, it's more of a day-to-day assessment of where he is at and how he's doing," Hinch said.

"This is a World Series-contending team so anytime you can get some opportunities to get in there, you want to put your best foot forward and hope for the best." - Kemp on competing for playing time in Houston.

Rangers: RHP Lance Lynn (12-5, 3.87 ERA) makes his 21st start of the season Sunday in the finale of a three-game series. Lynn is tied for the major league lead in wins.

Astros: RHP Rogelio Armenteros (0-0, 2.00) gets his first career start after throwing four scoreless innings in relief Tuesday against the Angels.