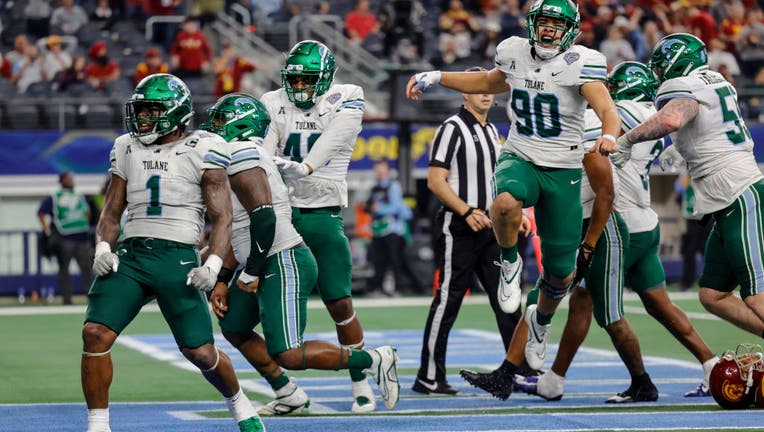 ARLINGTON, Texas (AP) — Tulane tight end Alex Bauman caught a 6-yard touchdown from Michael Pratt with 9 seconds left to cap a frantic finish by the 14th-ranked Green Wave in a 46-45 win over Heisman Trophy winner Caleb Williams and No. 8 Southern California in the Cotton Bowl on Monday.

Bauman’s contested catch, with linebacker Eric Gentry draped over him, was initially ruled an incompletion, but a replay review showed the ball never touched the ground as the players rolled over in the end zone. The Green Wave scored 16 points in the final 4:07, the game-winning touchdown coming after they got the ball back following a safety.

"I might have had a heart attack," Tulane coach Willie Fritz said moments after the game ended.

Williams was 37-for-52 passing for 462 yards and a Cotton Bowl-record five touchdowns, exactly one month after the quarterback suffered a hamstring injury in USC’s loss to Utah in the Pac-12 championship game that kept the Trojans from making the four-team College Football Playoff.

Tyjae Spears ran for 205 yards and his career-best fourth touchdown started the final scoring surge for the American Athletic Conference champion Green Wave (12-2), who completed an FBS-record 10-win turnaround around after going 2-10 last season. They were in the New Year’s Six game as the highest-ranked Group of Five team.

The Green Wave played in their most significant bowl since the Sugar Bowl on New Year’s Day in 1940, when they were still in the Southeastern Conference, and it was their biggest bowl win since the 1935 Sugar Bowl in New Orleans, where their campus is located.

After Spears’ 4-yard TD run with 4:07 left, the Green Wave opted to kick deep instead of trying an onside kick. Mario Williams signaled for a fair catch, but fumbled the ball out of bounds at the 1. Two plays later, defensive tackle Patrick Jenkins met Austin Jones in the end zone and smothered him for a safety.

"We were debating whether or not to onside kick," said Fritz, the seventh-year Tulane coach. "The book kind of told us it was slightly towards kicking it deep. Obviously it was great that we got it on the 1 and got the safety."

Pratt completed only 8 of 17 passes for 234 yards, but had two 24-yard completions on that final drive after the safety. He also scrambled 8 yards on a fourth-and-6 play.

The first 24-yard completion to Bauman converted a fourth-and-10. Deuce Watts then held on despite a crushing hit from a defender that left both of them on the ground after a 24-yard gain to the 6 with 18 seconds left.

After Williams followed coach Lincoln Riley from Oklahoma, the Trojans (11-3) matched the biggest turnaround in school history despite the coach’s first loss in six games at AT&T Stadium. It was a seven-win improvement over last season’s 4-8 record before Riley and Williams arrived on the West Coast.

The Trojans, who never trailed until that final touchdown, jumped ahead 14-0 when Williams threw TD passes on each of their first two possessions. His 9-yard TD to Michael Jackson III capped the game-opening drive that took 9 minutes, the longest by time for USC this season, and Terrell Bynum’s 3-yard catch capped a 95-yard drive early in the second quarter.

Tulane tied the game at 14 on Pratt’s touchdown pass to Jha’Quan Jackson, an 87-yard catch-and-run. But USC scored twice in the final 2:21 of the first half, on Raleek Brown’s 39-yard run and Brenden Rice’s 4-yard catch with 12 seconds left.

Rice, the son of Pro Football Hall of Fame receiver Jerry Rice, had career bests with six catches for 174 yards and two touchdowns. Tahj Washington had five catches for 109 yards.

Williams injured his hamstring on a 59-yard run early in the Pac-12 championship game loss to Utah on Dec. 2, but still threw for 363 yards and three TDs while finishing that game. USC’s only prior losses this season were to the Utes, who also beat them with a game-winning 2-point conversion at home in mid-October.

The Cotton Bowl was Williams’ third game this season with five TD passes. His only interception set up Tulane’s long game-tying TD. On a scramble with open field in front of him, Williams instead threw off his back foot and was picked off by Jarius Monroe.

There were 11 plays of at least 30 yards — six by Tulane (two passes and four runs) and five by USC (four passes, one run). The 87-yard catch-and-run by Jackson for the Green Wave matched the longest touchdown in the 87 Cotton Bowl games played.

USC gets an early start to Riley’s second season, with an Aug. 26 opener at home against San Jose State.