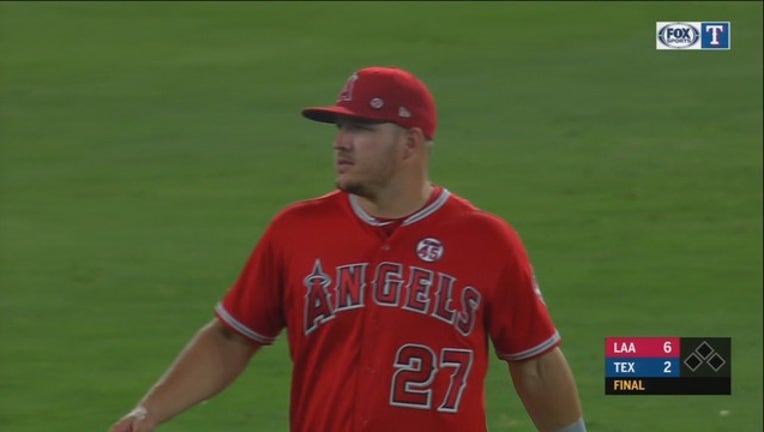 Trout hit a three-run homer in the third inning and a solo shot leading off the sixth. He has hit 24 home runs this season, tied for the American League lead with the New York Yankees' Edwin Encarnación, with eight against Texas.

Barria (3-2) was recalled from Triple-A Salt Lake for his sixth stint with Los Angeles this season. He allowed both runs on four hits and two walks. He has pitched five innings in all three of his Angels starts this season.

The Rangers were shut out over the final four innings by four relievers, limited to four hits overall and have lost four straight games. Ariel Jurado (5-4) gave up all six runs on seven hits and one walk after pitching seven shutout innings against the Detroit Tigers last Thursday.

The Angels have won both games played following the death of Skaggs on Monday. His spot in the rotation will come up for the first time in Thursday's series finale with Griffin Canning starting, moved back from Wednesday.

Trout has 33 career homers against the Rangers, second to his 37 against the Seattle Mariners. It was his 17th career multi-homer game and second this season.

The matchup of Barria vs. Jurado marked the first major league game in which both starters were from Panama.

Matt Thaiss was selected from Salt Lake and made his major league debut starting at third base with All-Star second baseman Tommy La Stella lost for 8-to-10 weeks after sustaining a right tibia fracture Tuesday night when he fouled a 97-mph fastball ball off his leg. David Fletcher moved from third base to second base.

Thaiss hit an opposite-field double in his first at-bat and went 1 for 3.

Tim Federowicz hit his third homer in 14 games with the Rangers and scored both of Texas' runs.

Angels: La Stella and OF Brian Goodwin were placed on the 10-day injured list. Goodwin sustained a right wrist contusion Tuesday when he was hit by a pitch.

Rangers: DH Hunter Pence (groin) won't play in Tuesday's All-Star Game after being voted in and isn't expected to be ready for Texas' first game after the break, July 11 at home against Houston.