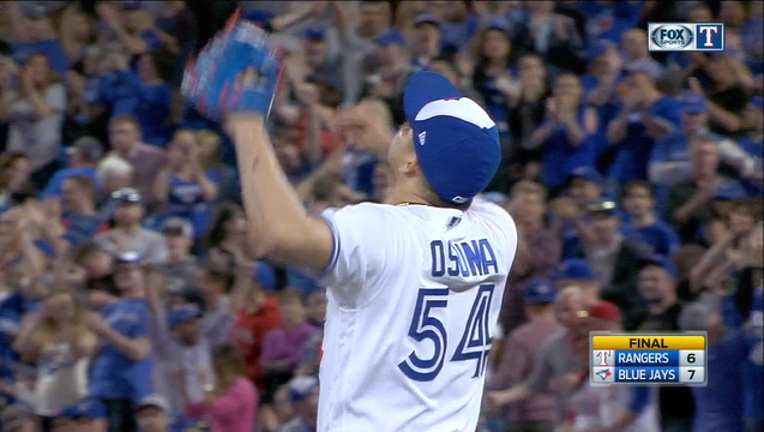 Justin Smoak and Kendrys Morales also connected for the Blue Jays, and Aaron Loup (2-0) pitched 1 1/3 innings for the win.

Texas has lost four straight, matching its longest slide of the season.

Travis went 3 for 4, extending his hitting streak to 10 games. He homered off A.J. Griffin in the second, doubled in the fourth, and singled and scored on a wild pitch in the sixth.

After Rougned Odor cut the gap to one with a three-run homer off Joe Smith in the ninth, Roberto Osuna came on and struck out Mike Napoli for his eighth save.

Toronto welcomed two star Infielders back to the lineup. Josh Donaldson and Troy Tulowitzki returned after being activated off the disabled list.

Tulowitzki had been out since April 21 with a strained right hamstring, while Donaldson went down on April 13 with a sore right calf. Both had been on rehab assignments at Class A Dunedin.

Donaldson finished 1 for 4 with a double. Tulowitzki went 1 for 2 with a single and two walks.

Griffin (4-2) was forced to leave in the second after suffering a strained left intercostal muscle. The right-hander, now winless in three starts, allowed three runs and four hits in 1 1/3 innings. It was the Rangers' shortest start of the season.

Toronto also got a grand slam from infielder Ryan Goins in Wednesday's win at Milwaukee. The last pair of Blue Jays to hit grand slams in consecutive games was Brad Fullmer and Raul Mondesi, who did it April 20 and 21, 2001.

Travis, who has a major league-best 18 extra-base hits this month, broke Aaron Hill's 2009 record for extra-base hits in a month by a Blue Jays second baseman. Hill had 16 in September 2009.