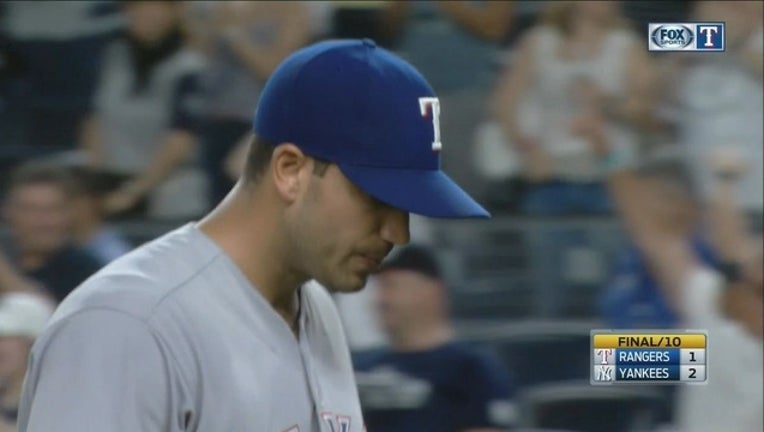 NEW YORK (AP) - Once Masahiro Tanaka and Yu Darvish got done dominating, the hitters finally had a chance.

And after midnight, Ronald Torreyes lined an RBI single with two outs in the 10th inning that sent the New York Yankees over the Texas Rangers 2-1 on Friday night for just their second win in 10 games.

"Super happy to be able to get a hit," Torreyes said through a translator. "Super happy for the outcome.

"Without Tanaka, there's no chance, we don't have a chance. He was excellent tonight. He held the game zero-zero," he said.

Brett Gardner also played a big part for the Yankees, hitting a tying home run with one out in the ninth off closer Matt Bush (2-3).

It was scoreless until the late innings as Tanaka and Darvish excelled in the first major league matchup between the Japanese stars. Tanaka pitched eight innings, Darvish was pulled after seven because of tightness in his triceps.

Darvish said he left as a precaution, adding through a translator, "I think I'm going to be fine for my next outing."

Chasen Shreve (2-1) escaped a bases-loaded jam in the top of the 10th, and Torreyes' hit kept the Yankees atop the AL East.

Gary Sanchez, whose passed ball gave Texas a 1-0 lead in the ninth, singled with one out in the 10th off Bush. A single by Didi Gregorius put runners at the corners and after Chris Carter struck out in his last at-bat for the Yankees, Torreyes singled to center field.

Often playfully hoisted by Gregorius in the dugout to high-five Aaron Judge after the tall slugger's home runs, the diminutive Torreyes wound up on the shoulders of his teammates.

Torreyes also made two sparkling defensive plays at third base. He dived to his left to snag Shin-Soo Choo's grounder and threw from his knees to start an inning-ending double play in the third, then made a backhand stab, spun and beat Elvis Andrus with a two-hop throw to first leading off the seventh.

The Darvish-Tanaka duel didn't disappoint the big crowd in the Bronx or the national television audience tuned in Saturday morning back in their homeland.

Darvish gave up just two singles, striking out 10 without a walk.

"I was trying to focus on my pitching," Darvish said. "I didn't watch him pitch."

Tanaka was totally in control, too, working around three singles in eight innings, fanning nine and walking two.

"I was excited going into the game but once the game starts, you're not actually going against Darvish, you're going against the Texas lineup," Tanaka said through a translator.

Tanaka retired 16 straight batters after escaping a two-on, no-out jam in the second. He stayed ahead the whole way by throwing first-pitch strikes to 25 of 27 hitters.

Despite the stellar outing, the no-decision left Tanaka at 0-6 in his last eight starts.

Judge singled in the ninth. The rookie who leads the majors in home runs has safely reached base in a career-best 25 straight games.

The Yankees cut Carter after the game, designating him for assignment. He tied for the NL lead with 41 home runs for Milwaukee last year, but hit only .204 with eight homers and 23 RBIs this season. 1B Tyler Austin will be promoted from Triple-A.

Rangers: LHP Martin Perez ripped a finger nail off his left thumb and broke the tip of the bone in an accident at his New York hotel Thursday night. The team said it's too early to know if he'll make his next start Wednesday night at Cleveland. ... LHP Cole Hamels (right oblique) threw a bullpen session before the game. If all is OK, he could pitch Monday in Cleveland in his first big league start since April 26.

Yankees: 3B Chase Headley missed his second straight game because of back spasms. He had an epidural, and Girardi said Headley might be able to play Sunday. ... OF Jacoby Ellsbury (concussion) is taking batting practice. The team hopes he can soon begin a rehab assignment.

Rangers: RHP Austin Bibens-Dirkx (2-0, 4.25 ERA) made his major league debut last month after 12 seasons in the minors. This will be his ninth game for Texas and fourth start.