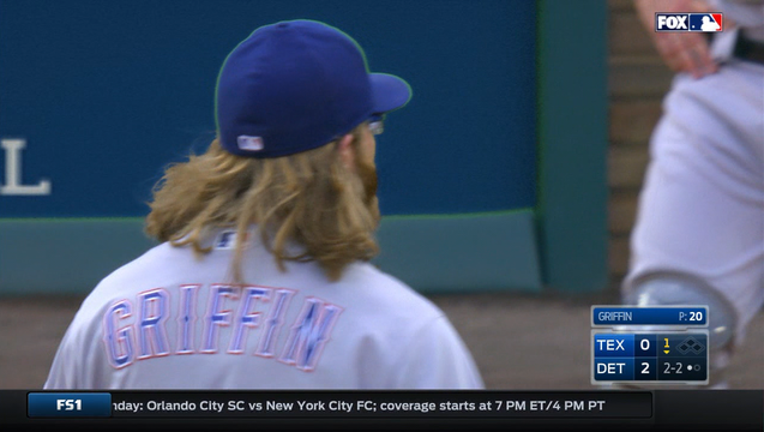 Nicholas Castellanos added a three-run homer in the third, and Justin Verlander (4-3) pitched seven solid innings for the Tigers. The Rangers were on their longest winning streak since a 12-game run in 2011, but it ended emphatically against Detroit.

Cabrera homered in his first at-bat after missing three games with a strained oblique, but Detroit second baseman Ian Kinsler left the game in the fifth with left hamstring tightness. The team said he was taken out for precautionary reasons.

Jonathan Lucroy homered for the Rangers.

Detroit hit three consecutive homers for the first time since June 1, 2013, at Baltimore, when Victor Martinez, Jhonny Peralta and Avila did it. The three solo shots Saturday gave the Tigers a 3-0 lead, and they added four more runs in the third.

Kinsler raced home from third on Cabrera's grounder to the mound, taking off when Griffin threw to first and narrowly beating the throw back to the plate. Castellanos made it 7-0 later in the inning with a drive to right.

Nomar Mazara hit a two-run double for the Rangers in the fourth, but Avila drove in two with a double in the bottom half.

Lucroy hit a solo shot in the sixth.

Verlander allowed three runs and four hits. He walked one and struck out five against a Texas team that had scored at least five runs in each of its previous eight games.

Rangers: 3B Adrian Beltre (right calf tightness) ran the bases before the game. "Just kind of doing about 50, 60 percent," he said. "First time running the bases, so I wanted to make sure just to get the feel for it." ... RHP Tyson Ross (thoracic outlet syndrome) came out fine after a bullpen session and is set to pitch Tuesday for Triple-A Round Rock on a rehab assignment. ... RHP Jose Leclerc (bruised right index finger) had an injection Friday and is not expected to re-join the Rangers on this trip.

Tigers: Kinsler left the game because of the same hamstring that kept him out for a week earlier this month.

Rangers: RHP Yu Darvish (4-2) takes the mound for the finale of this three-game series Sunday night. He allowed one run in seven innings in a win over Philadelphia on Tuesday.

Tigers: RHP Matthew Boyd (2-3) tries to bounce back after allowing seven runs in 2 1/3 innings against Baltimore on Tuesday.