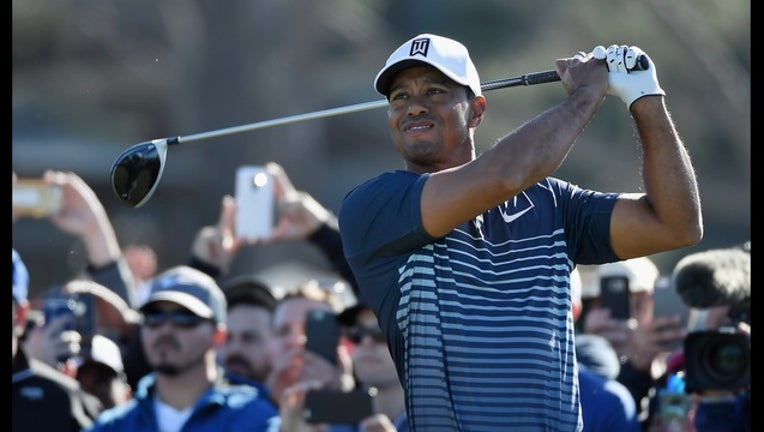 Tiger Woods plays his shot from the 13th tee during the second round of the Farmers Insurance Open at Torrey Pines North on January 26, 2018 in San Diego, California. (Photo by Donald Miralle/Getty Images)

SAN DIEGO (AP) - Ryan Palmer is the 36-hole leader in the Farmers Insurance Open. Jon Rahm is right behind, poised to reach No. 1 in the world. And for the first time in 29 months, a PGA Tour event will feature Tiger Woods on the weekend.

Palmer finished eagle-birdie on the North Course at Torrey Pines for a 5-under 67. That gave him a one-shot lead over Rahm, the defending champion who birdied two of his last three holes on the North for a 66.

The biggest buzz, as usual, was for Woods. He kept his fairway-lined following in suspense over his closing stretch on the front nine Friday simply by trying to make the cut, and it came down to the very last hole .

A wild drive was saved by a perfect flop shot to escape with par on No. 6. Another superb chip on the reachable par-4 seventh set up a birdie, the first time all week he was under par. A chip that bounced hard and rolled off the back of the green led to bogey and left him one shot outside the cut line. From gnarly rough right of the fairway on the par-5 ninth, he hammered a 6-iron to the wrong side of the green, leaving him two putts from 75 feet to make birdie and get to the weekend.

A beautiful lag for a tap-in birdie gave him a 71.

"It was a grind. I fought hard," Woods said. "Typical. Just me going out there and fighting for whatever I can get. It's all good."

There's a reason Woods has gone so long - August 2015 at the Wyndham Championship - without making a cut. This was only his second PGA Tour since then, the greatest reminder of back surgeries that effectively cost two full years of golf.

The next one is a bit more ominous. He still was 10 shots behind Palmer, who is going through a minor resurgence of his own. Palmer, who was at 11-under 133, spent the last 18 months on life at home after his wife was diagnosed with breast cancer. After her last dose of chemotherapy a year ago, followed by 35 radiation treatments, Jennifer Palmer has had nothing but clean scans.

Then, Palmer had surgery on his left shoulder to clean out bone spurs and had not played since August until he headed to Honolulu two weeks ago.

"A lot of distractions behind me," he said. "So we're definitely playing a little more free and clear."

The biggest distraction on another gorgeous day at Torrey Pines was a pair of bogeys early. He kept his patience, chipped in for eagle at the turn, and then finished with a beautiful approach to 12 feet on the par-5 eighth and a 20-foot birdie putt on the ninth.

And now he has to deal with a big presence in golf - Rahm.

The 23-year-old Spaniard won in a playoff last week in the California desert, moving him to No. 2 in the world. If he were to win this week, Rahm would go to No. 1.

He didn't have his best stuff from tee-to-green. Rahm made enough key putts to keep him pointed in the right direction.

"I was able to get up-and-down for par, and not making mistakes and taking advantage of the birdie putts," he said. "I probably shot the lowest I could shoot today."

Palmer and Rahm will be in the final group with Luke List, who had a 66 on the South.

And even with Woods lingering toward the bottom, there are plenty of big names lingering going into the weekend. Jason Day had a 64 and was four shots behind. Phil Mickelson, who hasn't fared all that on the South Course since the redo ahead of the 2008 U.S. Open, ran off a string of birdies on the front nine, salvaged a few mistakes with an eagle on No. 13 and finished with a birdie for a 68. He was five shots behind.

Rahm was five shots behind going into the weekend last year and closed with a 65, holing a 50-foot eagle putt on the final hole. That was his first victory, and he has added three more worldwide. Few players have more confidence at Torrey Pines.

Even when he wasn't sure where the ball was going off the tee, he didn't drop a shot.

The cut was at 1-under 143, which was starting to look out of reach for Woods. He missed two drives well to the left - by 65 yards on his opening hole, and deep into a hazard on his fourth hole, which led to double bogey to put him 2 over. He made the turn three shots out of the cut line, and then holed a 50-foot birdie putt to start his back nine.

His short game carried him from there, setting up birdies on the par-5 fifth hole and the short seventh hole.

The biggest adjustment to having been gone for so long is scoring. He was amazed to see so many players under par through two rounds.

"These guys are all going low and I haven't done that in a long time," Woods said.