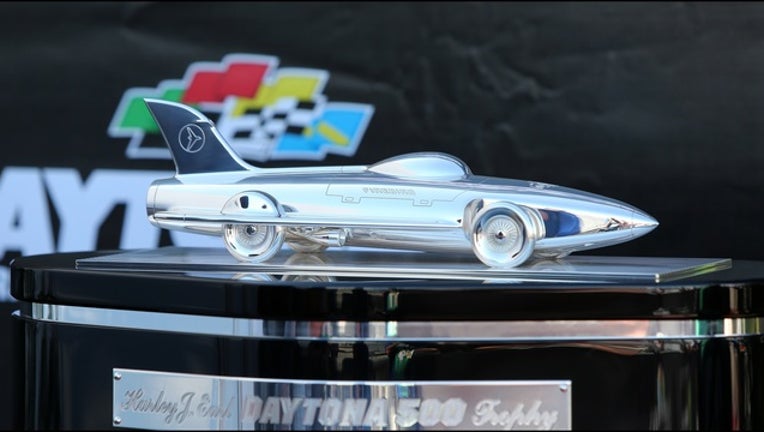 A detailed view of the Daytona 500 trophy prior to the Monster Energy NASCAR Cup Series 60th Annual Daytona 500 at Daytona International Speedway on February 18, 2018 in Daytona Beach, Florida. (Photo by Jerry Markland/Getty Images)

Austin Dillon put the No. 3 back in victory lane at Daytona International Speedway. Dillon won in the car number made famous by Dale Earnhardt and won 17 years to the day that the Hall of the Fame driver was killed in a last-lap accident at NASCAR"s famed track.

Dillon also won in the 3 two decades after Earnhardt's lone victory in the Daytona 500.

"It was so awesome to take the 3 car back to victory lane," Dillon said. "This is for Dale Earnhardt Sr. and all those Senior fans."

Dillon even replicated the slide Earnhardt did in 1998 and did a burnout in the shape of a 3 in the infield grass.

"The Big One" happened late in the Daytona 500.

William Byron spun for the second time in the Daytona 500, adding to Hendrick Motorsports' woes.

Byron spun in Turn 4 with 10 to go in "The Great American Race," bringing out the caution flag and setting up a shootout for the final laps.

Byron had damage all around his No. 24 Chevrolet and was several laps down when the race restarted.

Ryan Blaney won the second stage of the season-opening Daytona 500.

Blaney led a single-file parade for the final few laps in the segment and took the checkered flag ahead of Paul Menard, Joey Logano, Aric Almirola, Michael McDowell and Darrell Wallace Jr.

The bigger story was all the contenders knocked out before the final stage.

It was an even worse showing for Hendrick Motorsports, which lost Johnson and Chase Elliott. Hendrick teammate and rookie William Byron also was involved in a crash.

Patrick, Elliott, Keselowski and Harvick are done for the day. For Patrick, it prematurely ends her NASCAR finale. The Daytona 500 was Patrick's last stock-car race.

With 96 laps remaining, leader Ryan Blaney seemed to make a move to block Elliott on the backstretch. Elliott and Keselowski got together and started sliding across the track. Elliott hit the outside wall hard and started spinning into traffic.

Three other cars were involved, including the second accident for defending series champion Martin Truex Jr.

Johnson was collected in a nine-car accident that involved half of Joe Gibbs Racing and half of Hendrick Motorsports. Johnson was wrecked along with Hendrick teammate William Byron, while Gibbs drivers Erik Jones and Daniel Suarez were part of the scum.

The accident started when Ricky Stenhouse Jr. tried to block Ryan Blaney as they raced to the end of the first stage. Contact between the two cars sent Stenhouse shooting up the track, but he was able to save his Ford and avoid crashing.

Drivers tried to avoid Stenhouse and it triggered the accident that ended Johnson's day.

Johnson had a horrible Speedweeks. He had accidents in all three races at Daytona.

Kurt Busch won the first stage of the race under caution.

Kyle Busch has brought out a caution after 50 laps of the Daytona 500.

Busch had a tire problem at the start of the race that put him one lap down. Roughly 20 laps after the tire problem, Busch spun and the back of his Toyota hit the Daytona International Speedway wall. Busch had to go to pit road for repairs.

It's been a bad start to the race for Joe Gibbs Racing's two stars. Busch had his issues, and Denny Hamlin missed his pit stall during his first stop and was penalized a lap.

But, while Busch was on pit road for his repairs, his older brother Kurt assumed the lead of the race. Kurt Busch is the defending Daytona 500 winner.

Peyton Manning, with his hands firmly gripping the steering wheel at the "10 and 2" positions, has led the one of the youngest Daytona 500 fields in history to the green flag.

Manning had just 20 minutes of practice on the high-banked Daytona International Speedway and seemed overwhelmed as he navigated the track. A NASCAR official in the passenger seat helped guide the wheel as Manning drove through the turn.

"I've been upright and on my back, but I've never been sideways," Manning joked to the Fox Sports broadcasting booth.

He also noted that pole-sitter Alex Bowman was in position to pass Manning in the pace car. When Jeff Gordon asked Manning if he wanted to stay on the track for a few laps, Manning said he'd prefer to stay in his lane.

Dale Earnhardt Jr. gave a raucous command to start the engines, and Fox analyst Darrell Waltrip opened the race by saying "Danica Sue, this is for you, Boogity! Boogity! Boogity!" Danica Patrick is retiring from NASCAR after the Daytona 500.

NASCAR recognized Danica Patrick in the pre-race driver meeting in honor of her final Daytona 500.

Patrick is retiring from NASCAR after Sunday's race, and from racing altogether after the Indianapolis 500 in May.

As NASCAR executive Steve O'Donnell went through the list of honorees and dignitaries at the Daytona 500, he included Patrick. O'Donnell thanked her for her contributions to motorsports and asked her fellow drivers to applaud Patrick.

Patrick is the only woman to start the Daytona 500 from the pole, lead laps in the race and is the highest-finishing female driver in the 60 years of the race.

At the end of the driver meeting, she exited the tent alone, head high and focused. She kept a steely straight-ahead glare and showed no emotion.

Peyton Manning walked the red carpet at the Daytona 500 after a brief practice as pace car driver for "The Great American Race."

Manning was trailed by his son, Marshall, and the two posed alongside the Harley J. Earl trophy. When asked how much time he had in the pace car, Manning said "not much. About 20 minutes."

Manning had the cap of a Sharpie pen in his mouth as he signed autographs while walking into the pre-race driver meeting. He also said he was rooting for pole-sitter Alex Bowman, who is sponsored by Manning-endorsed Nationwide.

Manning is the bigger of the NFL MVP's at Sunday's race. The five-time MVP quarterback was in an official capacity, while two-time MVP Aaron Rodgers is at the race as the boyfriend of Danica Patrick. Rodgers has yet to publicly comment on the new relationship or his time in Daytona. He arrived Wednesday and watched Patrick compete in a qualifying race from atop her pit box Thursday night.

Chipper Jones is ready to take his cuts at Daytona.

Jones served as the honorary race official at "The Great American Race."

Jones is a big NASCAR fan and autographed some baseball bats for driver Chase Elliott. Jones was a long-time fan of Jeff Gordon and said he was still cheering for the No. 24 car. That ride now belongs to 20-year-old William Byron.

Unlike some Daytona 500 celebrities who know little about NASCAR, Jones talked about the photo finish at the Xfinity Series race and his excitement at meeting the drivers.

Jones hit 468 career home runs and was voted into the Baseball Hall of Fame last month in his first year of eligibility.

Charlize Theron is cheering for Danica Patrick in her final NASCAR race.

Theron is the honorary starter for the Daytona 500 and will wave the green flag to start the race.

Theron said it was "special" to attend Patrick's finale. Patrick is the only female driver to win a pole and lead laps at the Daytona 500.

"As a woman, that just seems pretty incredible," Theron said. "For me to be able to witness her last race, that feels very special. The girl in me is secretly obviously cheering for her. I just love that even my kids were just impressed that girl was racing cars today, too."

Theron also busted on "Italian Job" co-star Mark Wahlberg for puking during driver training for the movie. She also laughed as she recalled a trip to Daytona as a teen where she got drunk and then went skydiving.

Dale Earnhardt Jr. has an official role in his first Daytona 500 as a retired race-car driver.

The two-time Daytona 500 winner is the grand marshal for Sunday's season-opening race, and once his duties are complete, Earnhardt plans to watch "The Great American Race" from atop the pit box of pole-sitter Alex Bowman. Bowman replaced Earnhardt in the No. 88 Chevrolet following Earnhardt's retirement at the end of last season.

The one thing Earnhardt doesn't plan on doing is offering any advice to Bowman. He said it's way too late in the preparation process for Earnhardt to offer any wisdom.

Earnhardt, meanwhile, chose a T-shirt depicting his late father at the 1987 Daytona 500 for his grand marshal duties.

Four-time Formula One world champion Lewis Hamilton will be rooting for Bubba Wallace in the Daytona 500.

Wallace is the first black driver since 1969 to start the Daytona 500.

Hamilton followed Wallace on Twitter hours before Sunday's race and then sent a message to the driver on the social-media site.

"Wishing you the absolute best today in your race. Smash it!!" Hamilton posted.

Hamilton is mixed race and the first and only black driver to race in Formula One.