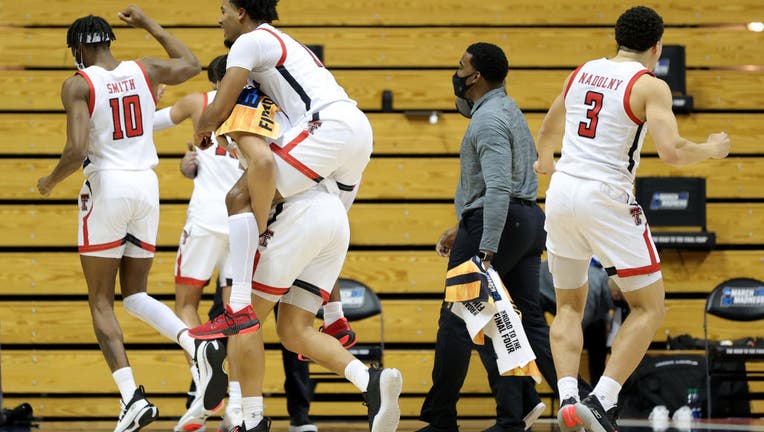 BLOOMINGTON, INDIANA - MARCH 19: The Texas Tech Red Raiders celebrate defeating the Utah State Aggies 65-53 in the first round game of the 2021 NCAA Men's Basketball Tournament at Assembly Hall on March 19, 2021 in Bloomington, Indiana. (Photo by Sta

The Red Raiders snapped a two-game losing streak and made new memories in the tournament after their most recent appearance, a loss to Virginia in the 2019 national championship game. Texas Tech (18-10) can reach its third consecutive Sweet 16 with a win over third-seeded Arkansas on Sunday.

"We told our guys to play fearless, to play with courage and to let it rip," Red Raiders coach Chris Beard said. "That’s our theme this year — we're here, let it rip. We think we can win six games in this tournament."

The Red Raiders listened — but they also faced a daunting challenge against Utah State center Neemias Queta. He finished with 11 points, 13 rebounds and six assists, and tied the school's single-game school record with seven blocks. Justin Bean had 13 points and eight rebounds for the Aggies (20-9), who lost their final two games.

"Not many guys in the world — I mean college basketball, NBA, pro basketball, in the world — can do something like that," Utah State coach Craig Smith said, referring to Queta's numbers. "He’s a star player, and your star players have to deliver, especially when the pressure is on and he did."

McClung, the high-scoring graduate transfer from Georgetown, managed to keep the Red Raiders close early, though they trailed most of the first half.

Terrence Shannon Jr. changed the game by scoring eight of his 10 points during the decisive 13-0 run early in the second half to make it 38-31. Texas Tech sealed it with a 9-2 spurt that extended its lead to 58-43.

Kevin McCullar had 10 points and seven rebounds for Texas Tech.

"We had to make some adjustments at halftime," McCullar said. "We were trying to be more aggressive on defense. TJ (Shannon) started making shots and we just played better on the defensive end in the second half."

Utah State: Queta, a junior, was impressive on a day the Aggies committed 22 turnovers and were far from flawless. If the junior returns next season, the Aggies could be back and might even get their first tourney win since 2001. He joins Baylor's Ekpe Udoh, in 2010, as the only players in tournament history to finish with at least 10 points, 10 rebounds, six assists and five blocks since blocks became a recognized stat.

Texas Tech: Despite forcing 13 first-half turnovers, the Red Raiders stumbled offensively. Shannon helped the Red Raiders get back on track in the second half as they looked like a team that climbed as high as No. 7 in the rankings this season.

Perhaps Utah State guard Marco Anthony looked familiar to Beard and the Red Raiders. After all, the 6-foot-5 guard was on the opposing bench during Texas Tech's title game loss to Virginia. Anthony didn't play that night but the San Antonio prep star made an impact this time, scoring 11 points.

After being pulled off the floor during warmups for a first-round Big 12 Tournament game last March and learning on the flight home that the NCAA had canceled its tournament, Beard gave each player a ring to commemorate the lost season.

"I want to thank Mr. (Joe) Lunardi. He never picks us and our guys kind of feed off this," Beard said in reference to ESPN's longtime bracket analyst. "I tell our guys to stay off social media. It's kind of hard this time of year but a couple of guys brought that to our attention. Not sure if he got a speeding ticket in Lubbock back in the day or whatever, but we made a run in the last tournament and we intend to make a run again."