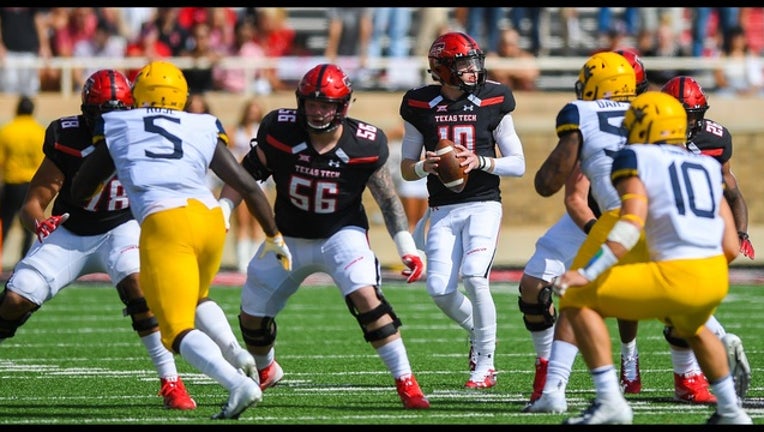 Alan Bowman #10 of the Texas Tech Red Raiders passes the ball during the first half of the game against the West Virginia Mountaineers on September 29, 2018 at Jones AT&T Stadium in Lubbock, Texas. (Photo by John Weast/Getty Images)

Red Raiders coach Kliff Kingsbury said Sunday there wasn't a timetable for Bowman's return but that it would likely be "sooner than later" because Bowman didn't have broken ribs.

Bowman was injured in the second quarter of a 42-34 loss to the Mountaineers when he was sandwiched on a hit by Ezekiel Rose and Keith Washington as he threw a pass. Kingsbury said Bowman was evaluated at the team's facility before being taken to a hospital.

"I've never had one that's had it," Kingsbury said. "It's a new kind of experience for all of us. He's doing better. He was up and alert and seemed to be in a good mood."

Bowman was the nation's leading passer going into the game after taking over in the season opener when McLane Carter sprained an ankle in a loss to Mississippi.

Jett Duffey replaced Bowman and had the Red Raiders within eight points and driving in the fourth quarter after they trailed 35-10 at halftime. Duffey's second interception was returned for what amounted to a clinching touchdown by Washington.

Carter won the preseason competition to become the starter. Kingsbury hasn't said when the junior might return from his injury. The next game for the Red Raiders is Thursday, Oct. 11, at TCU.

"We're being cautious," Kingsbury said. "His game is a little bit different than Alan's where he's going to move and make plays. So we want to make sure he's 100 percent before we get him back out there."

Duffey, a sophomore, had his first career touchdown pass and scoring run to help the Red Raiders get within 35-27. He threw for 172 yards and ran for 86.