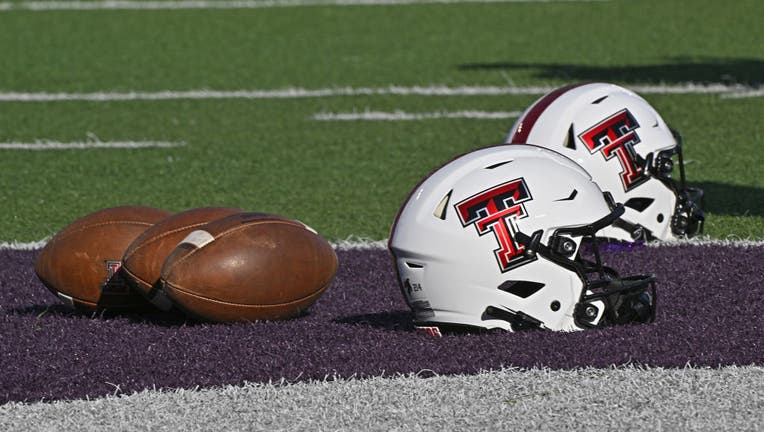 MANHATTAN, KS - OCTOBER 01: A general view of footballs and Texas Tech Red Raiders helmets on the field, before a game against the Kansas State Wildcats at Bill Snyder Family Football Stadium on October 1, 2022 in Manhattan, Kansas. (Photo by Peter A

MANHATTAN, Kan. (AP) - Adrian Martinez rushed for 171 yards and three touchdowns and threw for another score, leading No. 25 Kansas State past Texas Tech 37-28 on Saturday.

Martinez was 12-for-19 passing for 116 yards for Kansas State (4-1, 2-0 Big 12), while Deuce Vaughn had 170 rushing yards for the Wildcats, who extended their winning streak against the Red Raiders to seven games.

Martinez raced 57 yards on the first play of the game, then capped it with an 18-yard touchdown on the second play, giving K-State a quick 7-0 lead.

The Wildcats also got three field goals from Chris Tennant after drives stalled.

Tech cut the lead to 13-7 with 1:24 left in the first half. After gaining just 48 yards of total offense, the Red Raiders went 86 yards on nine plays, capped by a 6-yard touchdown pass from Smith to Nehemiah Martinez.

K-State answered with its second two-play drive of the game. Vaughn ran 69 yards to the Tech 8-yard line on the first play after the kickoff. Following an offensive holding penalty, Martinez found Phillip Brooks with an 18-yard touchdown pass.

Martinez then scored on his second big run of the day, 69 yards untouched up the middle of the field. Tennant's 32-yard field goal gave the Wildcats a 30-20 lead with 9:07 left. A fumble on the next series gave K-State the ball at the Tech 27-yard line and the Wildcats iced the game with Martinez's third rushing touchdown.

Smith scored from 3 yards out for Tech's final touchdown with 2:23 left.

Texas Tech: Smith can carry the Red Raiders on offense. The 6-foot-5 quarterback can sling it, but he also has the ability to carry defenders when he chooses to run.

Kansas State: The Wildcats have two great ballcarriers. Besides Vaughan, an All-American, Martinez can fool defenses look with his elusiveness.