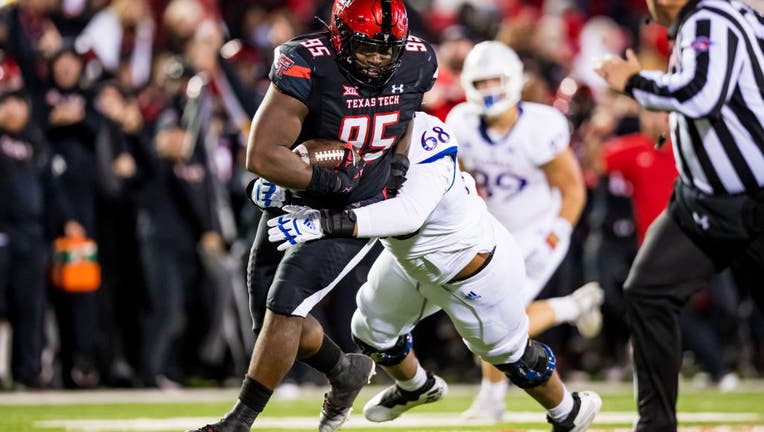 LUBBOCK, TEXAS - NOVEMBER 12: Defensive lineman Jaylon Hutchings #95 of the Texas Tech Red Raiders is tackled by offensive lineman Earl Bostick Jr. #68 of the Kansas Jayhawks after recovering a fumble during the second half of the game at Jones AT&am

Shough rushed for a 9-yard touchdown on the first play of the fourth quarter to give Texas Tech (5-5, 3-4 Big 12 Conference) a 33-21 lead. It was the first score by either team in the second half.

Tahj Brooks sealed the victory with a 5-yard touchdown run with 3:33 remaining in the game. Four different Red Raiders scored four rushing touchdowns in the win.

"We had a different play, but they came out in a soft box and I knew that we could knife them underneath because of the wide box," Shough said. "Tahj (Brooks) made him miss and it was just a great play."

Shough was 16-for-25 passing for 246 yards and a touchdown in his first start since the opening week of the season. Texas Tech totaled 510 yards of offense with 264 of them on the ground.

"The one thing that Shough did was that when a play wasn’t there, he pulled it down, got vertical and was able to get yards," Texas Tech head coach Joey McGuire said. "Then we had our running back come in like a three-headed monster and we got four rushing touchdowns."

The Red Raiders used a brief two-quarterback system with Shough and Donovan Smith. Smith rushed for a 6-yard touchdown on the opening drive where Shough was responsible for 57 of the 75 yards on the drive.

The Jayhawks managed to claw back to trail 27-21 at halftime on Jason Bean's 16-yard touchdown run and his 3-yard scoring toss to Devin Neel. Quentin Skinner and Bean connected for a 20-yard touchdown to pull the Jayhawks within 33-28 with eight minutes remaining in the game, but the Red Raiders used a Trey Wolff field goal from and a

"We talked this week about finishing games in the fourth quarter," McGuire said. "I thought we did such a good job of finishing that game as a team."

Bean was 17-for-28 passing for 270 yards. He threw three touchdown passes and ran for a score in his fourth start of the season after taking over for the injured Jalon Daniels. Jared Casey and Luke Grimm were the benefactors of two Bean passing scores in the first half.

Neel rushed for 190 yards just a week after rushing for 224 yards against Oklahoma State.

"At the end of the day, Texas Tech executed," Kansas head coach Lance Leipold said. "We had opportunities to make plays, close gaps and we didn’t. There were a lot of different things in this game that we were outplayed in."

Kansas accumulated 525 yards and 293 came through the passing game.

Kansas: The Jayhawks found success in the passing game. Bean found Casey for a 66-yard touchdown pass on a fourth-and-1 play for an early score. Kansas struggled to limit the Red Raiders rushing attack. A pair of Bean turnovers and missed field goals hampered Kansas.

Texas Tech: The Red Raiders entered the game eighth in the conference in rushing offense averaging 143.5 yards per game. Shough led the way as the Red Raiders accumulated 264 rushing yards. The secondary couldn’t slow the Jayhawks giving up 15.4 yards per completion.

Texas Tech won its fifth home game of the season. It was the first time since 2009 the Red Raiders recorded five or more wins at home in a season. With one final game in Lubbock slated on the schedule, Texas Tech could match the 6-1 home record of its 2009 squad. Texas Tech needs one win to become bowl-eligible.

Kansas: The Jayhawks will host Texas for senior day.