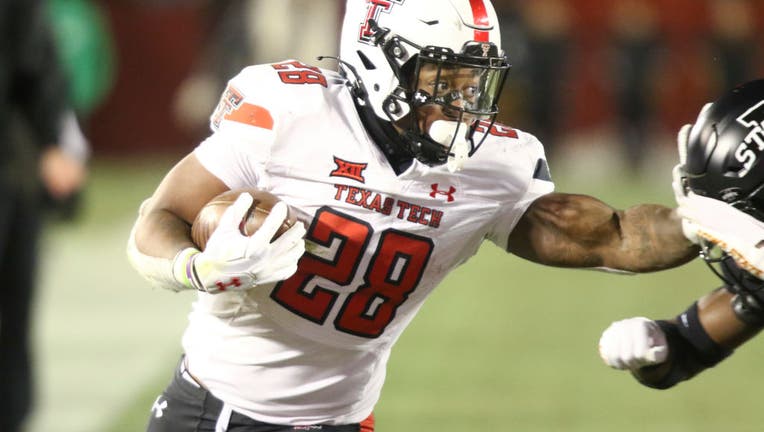 AMES, IOWA- NOVEMBER 19: Running back Tahj Brooks #28 of the Texas Tech Red Raiders runs up the field during the second half in front of defensive back Treyveon McGee #24 of the Iowa State Cyclones at Jack Trice Stadium, on November 19, 2022 in Ames,

Shough finished 15-of-21 passing for 141 yards, while helping Texas Tech earn its first road win of the year.

"I was proud of the offense," Red Raiders coach Joey McGuire said. "They knew how hard the defense had played and we try to play off of each other."

At one point, Iowa State (4-7, 1-7) had gained more than twice as many yards as Tech (338 to 151), but the Cyclones failed to reach the end zone, thanks to a pair of third-quarter goal-line stands by the Red Raiders defense.

The Cyclones ran five plays from the 2-yard line or closer without scoring a touchdown.

"The stat sheet on offense is not pretty," McGuire said. "But the W in that right column for the Red Raiders is definitely pretty. I can't be more proud of our guys."

Iowa State finally broke through when Hunter Dekkers found Easton Dean open down the sideline for a 24-yard touchdown. Dean leaped over a defender on his way to giving Iowa State a 10-7 lead with 11:18 left to play.

Dekkers finished with 294 yards on 23-of-35 passing for the Cyclones. Xavier Hutchinson caught eight passes for 101 yards.

Texas Tech drove 96 yards in 14 plays for the lone touchdown of the first half. Donovan Smith capped it with a 1-yard run, giving the Red Raiders a 7-0 lead.

Drake Nettles kicked a 36-yard field goal to get Iowa State within 7-3 at halftime. Nettles missed an earlier attempt and had another blocked as time expired in the second quarter.

The victory made Texas Tech bowl eligible for the second straight season.

"I'm so excited," Red Raiders defensive tackle Tony Bradford said. "I was filled with emotions at the end of the game. I almost couldn't even walk over to shake the opposing team's hand."

Texas Tech has bounced back after losing four of five games and earned a bowl bid. It's been a season of growing pains for Iowa State, which has younger players at key positions, including sophomore quarterback Dekkers.

With seven catches in the first half against Texas Tech, Iowa State's Xavier Hutchinson climbed into the Big 12's top ten for career receptions. Hutchinson began Saturday with 244 catches in three seasons and needed to reach 250. He has the most receptions in school history and made at least one catch in all 36 games of his college career.

Texas Tech: The Red Raiders closes out the regular season with a home game Saturday against Oklahoma.

Iowa State: The Cyclones travel to play TCU. The Horned Frogs have already clinched a spot in the conference championship game.