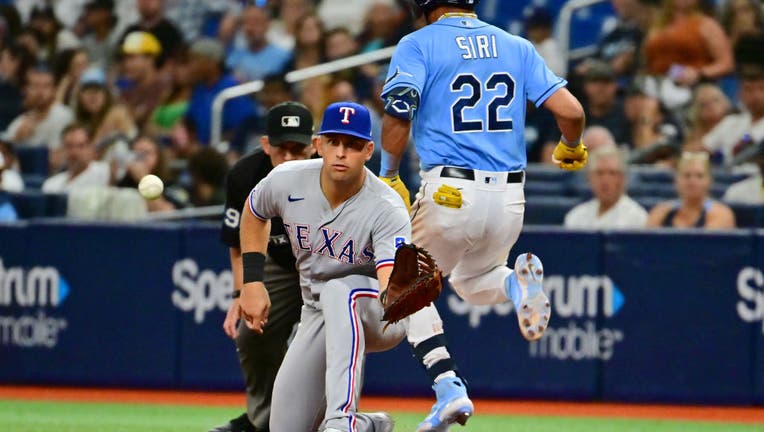 ST PETERSBURG, FLORIDA - SEPTEMBER 17: Jose Siri #22 of the Tampa Bay Rays reaches first base safe after hitting a single in the seventh inning against the Texas Rangers at Tropicana Field on September 17, 2022 in St Petersburg, Florida. (Photo by Ju

Tampa Bay remained 1 1/2 games behind Toronto for the top AL wild card. The Rays hold a 5 1/2-game advantage over Baltimore, which is fourth in the race for the three wild cards.

"It's nice to see everything clicking at this time," Rays reliever Jason Adam said. "It doesn't matter if you win 11-0 like we did the other day or you won like today or you win 1-0. Just whatever it takes to get that win. We're all bonded. We want to play until November."

Jonah Heim homered and Jon Gray (7-7) allowed two runs and two hits over 4 1/3 innings in his second start for Texas since returning from a left oblique strain.

"I like what Jonny did tonight," Rangers interim manager Tony Beasley said. "He was pounding the zone with his fastball. He had his breaking ball working as well. So, it was a good outing."

The Rangers (63-82) were assured their sixth consecutive losing season. It extends the longest streak since the team moved to Texas from Washington in 1972.

Walls went deep to put the Rays up 3-1 on the first pitch from reliever Taylor Hearn, who replaced Gray in the fifth.

David Peralta, in the first, and Wander Franco, in the third, hit sacrifice flies as the Rays took a 2-0 lead. Isaac Paredes extended the advantage to 5-1 on a two-run double with two outs in the seventh against Dennis Santana.

Heim made it 2-1 with a fourth-inning leadoff homer against Ryan Yarbrough (2-8). Heim flied out to the right field warning track on a 3-2 pitch from Javy Guerra with the bases loaded and two outs in the fifth.

Yarbrough allowed one run and four hits in three innings after replacing opener Shawn Armstrong with two outs in the second.

"They threw some good arms at us," Beasley said. "Kind of a bullpen day for them. Different types of movement, different arm slots. They can make it challenging for us offensively."

Jalen Beeks didn't allow a baserunner in the sixth and seventh. Adam gave up a single in the eighth but hit the dirt to get out of the way of a hard-hit ball by Heim that resulted in an inning-ending double play.

"That's a great question," Adam said when asked how he got out of the way. "I don't know. That was obviously a scary moment, but thankfully dodged me."

Texas SS Marcus Semien went 2 for 4 on his 32nd birthday. ... Rangers slugger Nathaniel Lowe had two hits and improved his batting average to .310. ... It was the switch-hitting Walls' first right-handed homer. He has seven left-handed. ... Heim has homered in two of his last three games after going a career-long 30 games without one.

The Rays passed 1 million fans in home attendance Friday night, which leaves Miami and Oakland as the only teams that haven't reached the plateau this season. Tampa Bay has drawn under 1.3 million at home every year since 2015.