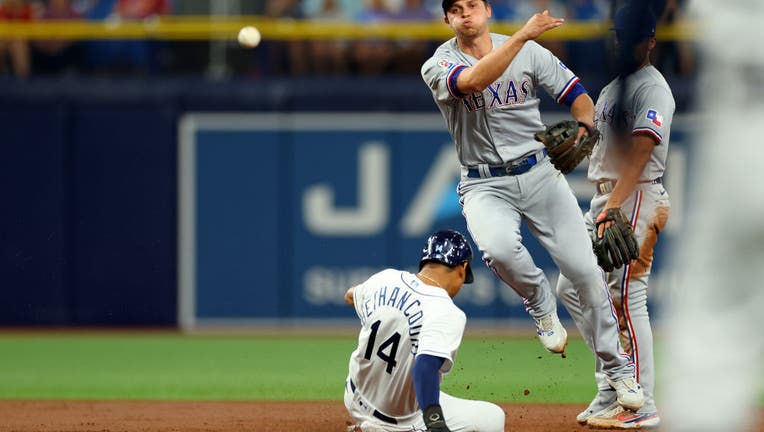 ST PETERSBURG, FLORIDA - SEPTEMBER 16: Corey Seager #5 of the Texas Rangers turns a double play as Christian Bethancourt #14 of the Tampa Bay Rays slides into second during a game at Tropicana Field on September 16, 2022 in St Petersburg, Florida. (P

"The pitch to Seager wasn’t a bad pitch, tip your hat to him. I didn’t execute the pitch to Lowe and he did what he’s supposed to do," said Kluber, who has allowed eight hits in consecutive starts for the first time in more than four years. "Two pitches, or I guess one pitch that I was really disappointed with ... That’s how it goes."

Rangers starter Martin Perez (12-6) gave up three runs and nine hits in 5 1/3 innings. Three of those were by Rays catcher Francisco Mejia, driving in runs with a single in the second and a double in the sixth.

Perez pitched at least five innings for the 27th start in a row, and gave up two runs in the second.

"They're trying to hit balls in the alley and they hit some ground balls, got on base," Perez said. "That’s what happens when you face a good team, but I think I made my pitches and we won."

Jose Leclerc pitched the ninth for his sixth save in seven attempts, retiring Harold Ramirez on a bases-loaded grounder to end the game.

The Rays, who opened a 10-game homestand, left at least one runner on base in every inning except the eighth, losing for the sixth time in eight games. They fell 1 1/2 games behind Toronto in the race for the top AL wild card spot while holding onto a 4 1/2-game lead over Baltimore in competition for the third wild card.

"We started off this month well. The last couple of weeks we've struggled a bit, but we've got to keep pushing forward," Mejia acknowledged through a translator.

Rays: LHP Brooks Raley was reinstated from the restricted list, and RHP Kevin Herget was optioned to Triple-A Durham. The unvaccinated Raley was unavailable for both of the Rays' series in Toronto this summer.

The Rays, who traded Lowe in December of 2020, are not surprised by his 25 home runs. They are impressed to see him in contention for the AL batting title.

"We were confident he had that light-tower power," Rays manager Kevin Cash said, "but the way he’s shown adjustability — for him to be hitting above .300 — is pretty remarkable."

LHP Ryan Yarbrough (1-8, 4.38 ERA) will make his 10th start of the season for the Rays on Saturday night after pitching five scoreless innings of relief Sunday against the New York Yankees. RHP Jon Gray (7-6, 3.79) will be making his second start for the Rangers since his return from the injured list with a left oblique strain.