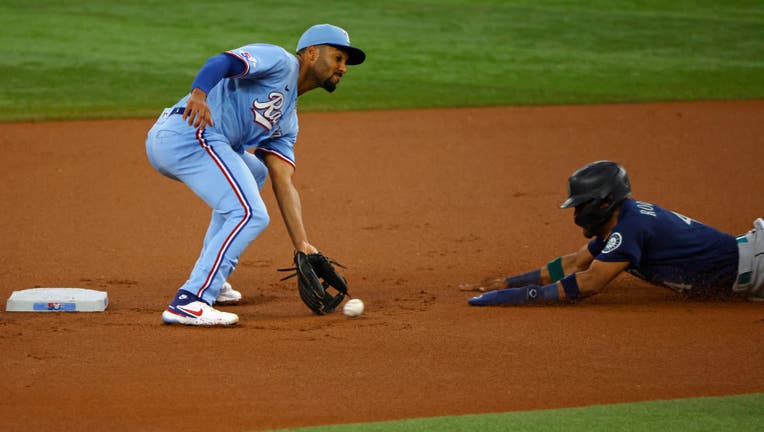 ARLINGTON, TX - JULY 17: Marcus Semien #2 of the Texas Rangers takes the throw before tagging out Julio Rodriguez #44 of the Seattle Mariners at second base on a steal attempt during the first inning at Globe Life Field on July 17, 2022 in Arlington,

ARLINGTON, Texas (AP) - The Seattle Mariners won their 14th straight game as rookie All-Star Julio Rodriguez hit a two-run double and Ty France homered after joining him on the AL team to beat the Texas Rangers 6-2 on Sunday.

The Mariners moved closer to the team record of 15 consecutive wins during their most recent playoff season in 2001, when they went 116-46. The 14-game streak is the longest going into an All-Star break in major league history.

Cal Raleigh's two-run homer put the Mariners ahead for good in the fourth inning as they matched reigning World Series champion Atlanta's June streak for the longest this season. St. Louis had a 17-game winning string last year.

Rodriguez, who wasn't even six months old the last time the Mariners were on a streak this long 21 years ago, lined a double off the wall in left-center field in the seventh, then raced home on France's single for a 6-1 lead.

Raleigh pulled a two-out, two-run homer down the line in right field for his 13th homer, erasing a 1-0 deficit as the Mariners won for the 22nd time in 25 games and swept a fourth consecutive series for the first time since 2001.

France's solo shot in the fifth, his 11th homer, came a couple of hours after the first baseman was added to the American League All-Star team. Los Angeles Angels outfielder Mike Trout was sidelined by back spasms for Tuesday's game at Dodger Stadium.

Marcus Semien's 12th homer, a solo drive, put Texas ahead in the third before the Rangers were swept in a four-game series for the first time this year while matching their season worst at eight games under .500 (41-49).

With Seattle leading 2-1 in the fourth, reliever Ryan Borucki (2-0) walked his first two batters to load the bases with two outs before getting rookie leadoff hitter Josh Smith on a groundout. The left-hander retired Semien, All-Star Corey Seager and Nathaniel Lowe in order in the fifth.

Texas starter Glenn Otto (4-6) dropped to 0-4 in five starts since spending 15 days on the COVID-19 list. The right-hander stayed in after getting hit on the right side and arm by the barrel of Eugenio Suarez's broken bat in the second, allowing three runs in six innings.

Mariners right-hander Chris Flexen gave up a run in 3 2/3 innings after starting on three days' rest for the first time in his career. Paul Sewald, the last of six Seattle pitchers, worked a scoreless ninth after a leadoff walk.

The Rangers play at Miami on Thursday in a makeup game from the delayed start of the season, then go to Oakland. RHP Jon Gray, the opening day starter, is expected to face the Marlins.