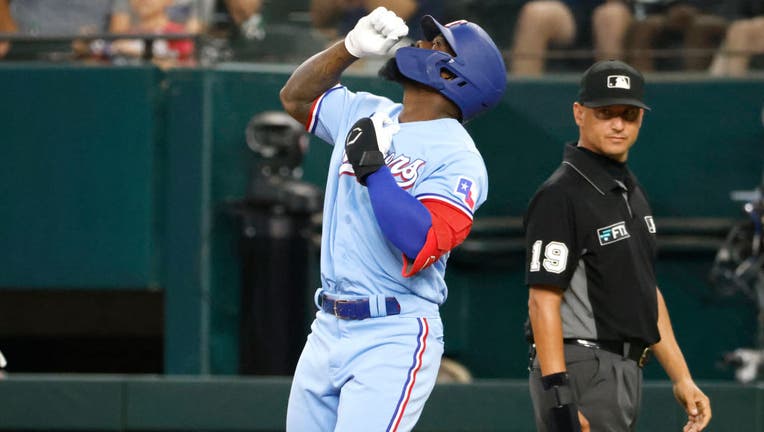 ARLINGTON, TX - AUGUST 14: Adolis Garcia #53 of the Texas Rangers reacts after hitting a run-scoring single against the Seattle Mariners during the seventh inning at Globe Life Field on August 14, 2022 in Arlington, Texas. (Photo by Ron Jenkins/Getty

ARLINGTON, Texas (AP) - Corey Seager doubled twice and scored twice, including the tiebreaking run in the seventh inning, as the Texas Rangers beat the Seattle Mariners 5-3 on Sunday.

Josh Sborz (1-0) struck out five of the seven batters he faced in the seventh and eighth innings, allowing only one walk. The five strikeouts were a career high.

Jose Leclerc pitched a perfect ninth inning for his first save since 2020.

Seager doubled to left field with two outs in the seventh, reached third on a wild pitch by Matt Brash (3-4) and scored on Adolis Garcia's single. Nathaniel Lowe followed with his second double of the game, a ground-rule version to left, off Erik Swanson to score Seager.

The Mariners pulled even 3-all in the sixth when Julio Rodriguez reached on a throwing error by Seager at shortstop, allowing J.P. Crawford to score.

Texas regained the lead 3-2 in the fifth when Seager doubled, advanced to third on a groundout and scored on a wild pitch that bounced in front of the plate.

Mitch Haniger's fifth-inning single that scored Dylan Moore to tie the score at 2 and extend his hitting streak to 11 games. That's three games in late April before he was sidelined 88 games by an ankle injury and eight games since his return on Aug. 6.

Bubba Thompson gave the Rangers a 2-1 lead with a single that scored Lowe and Meibrys Viloria.

Seattle scored first on Sam Haggarty's single through the hole on the left side to bring home Crawford.

Gilbert went into play with a 1.02 ERA against Texas this season in 17 2/3 innings over three previous starts.

Lowe has a 20-game on-base streak, longest by a Ranger this season. . C Curt Casali made his Mariners debut, going 0 for 2 with a walk and a strikeout. Casali was acquired Aug. 2 from San Francisco and came off the injured list (right oblique strain) Thursday. . Rangers LHP Matt Moore began three days' paternity leave. Moore was replaced by RHP Yerry Rodriguez, who was recalled from Triple-A Round Rock and hasn't appeared in a big-league game.