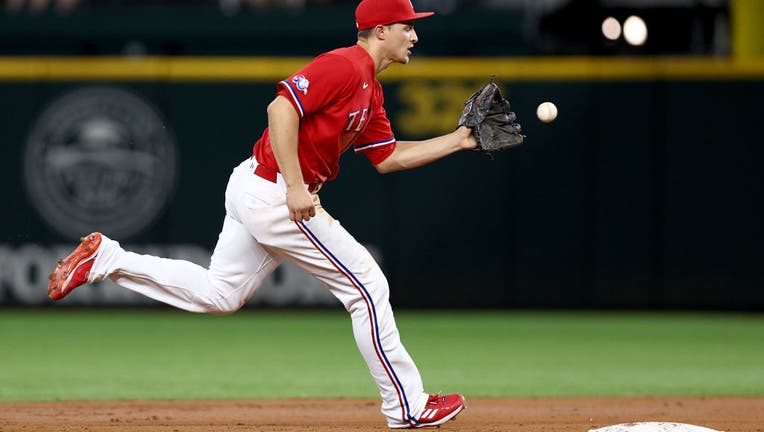 ARLINGTON, TEXAS - AUGUST 12: Corey Seager #5 of the Texas Rangers fields a ground ball hit by Jesse Winker #27 of the Seattle Mariners in the top of the third inning at Globe Life Field on August 12, 2022 in Arlington, Texas. (Photo by Tom Penningto

ARLINGTON, Texas (AP) - Star rookie Julio Rodriguez got two hits in his return to the Seattle lineup and the Mariners took over the first wild-card position in the American League by beating the Texas Rangers 6-2 on Friday night.

The 21-year-old Rodriguez, who put on an impressive show in the All-Star Home Run Derby, had missed the Mariners’ previous 11 games with a wrist injury.

Rodriguez hit a tiebreaking, opposite-field single to shallow right with the bases loaded in the fourth inning. He was the first batter to face Jose Leclerc, who relieved Taylor Hearn (5-7).

Rodriguez hit a grand slam off Leclerc at Globe Life Field on July 15.

"I just felt good," Rodriguez said. "I just went out there and competed. I wasn’t worried about anything."

Rodriguez also sent 400-foot shot nearly over the left-field foul pole in the sixth that was ruled foul, even after a Seattle challenge.

"I thought it went over," Rodriguez said. "They should put (the pole) higher."

George Kirby (4-3) allowed two runs in 5 2/3 innings on seven hits with five strikeouts and one walk. It was the rookie’s second straight win.

The victory, combined with Toronto’s loss to Cleveland, gave the Mariners a half-game lead over the Blue Jays.

The Mariners are a season-best 10 games over .500 and are 12-2 with nine consecutive wins this season against the Rangers, who dropped to a season-low 14 games under .500.

Seattle took a 4-2 lead into the ninth inning and Eugenio Suarez added a two-run double.

The Rangers scored on Marcus Semien’s groundout in the third and Jonah Heim’s single in the sixth.

Sborz took a liner off his upper right arm during the game’s third batter, Mitch Haniger. Sborz finished the inning with one more pitch and was replaced in the second by Hearn, the first of five Texas relievers.

Rangers manager Chris Woodward said Sborz was obviously sore but the pitcher’s status won’t be clear until being examined Saturday.

The Rangers’ first hit was Nathaniel Lowe’s infield single leading off the second, but he was doubled off first to end the inning following a running, leaping catch by Haniger at the wall in right field on a ball hit by Leody Taveras.

Seattle manager Scott Servais’ voice cracked as he talked about the milestone victory.

"It’s really hard to do – and not get fired," he said with a laugh. "It’s a credit to our players. I said that to them when they dumped the Gatorade or whatever on me."

Woodward was ejected by Jerry Meals, the plate umpire and crew chief, in the bottom of the fourth inning during Adolis Garcia’s leadoff at-bat. It was Woodward’s first ejection this season.

Seattle was 3 for 12 with runners in scoring position, Texas 1 for 6. … Lowe has an 18-game on-base streak, the longest by a Ranger this season. … Haniger had three singles and is 10 for 22 in six games since returning from an ankle sprain that sidelined him since late April. … The Mariners designated RHP Ken Giles for assignment.

Rangers: OF Kole Calhoun (right heel irritation) is feeling better, but Woodward isn’t sure when he can return.

Rangers: RHP Dane Dunning (2-6, 4.04) won last Saturday for the first time since April 30, shutting out the Chicago White Sox over seven innings on one hit and one walk.