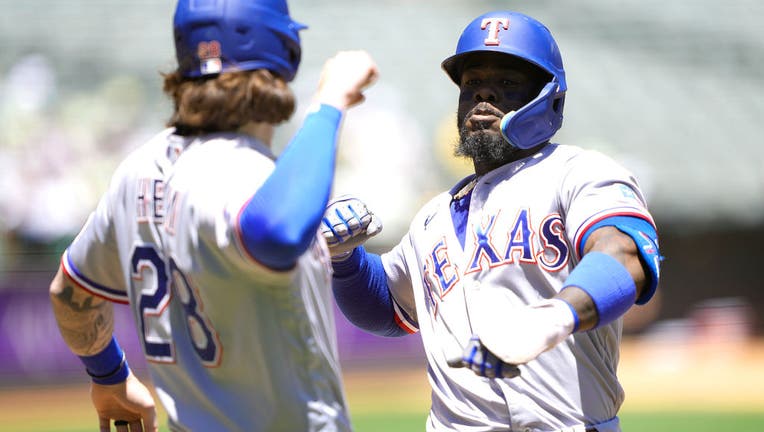 OAKLAND, CALIFORNIA - JULY 24: Adolis Garcia #53 and Jonah Heim #28 of the Texas Rangers celebrates after Garcia hit a two-run home run against the Oakland Athletics in the top of the first inning at RingCentral Coliseum on July 24, 2022 in Oakland,

Perez (8-2) had six strikeouts and won his career-best eighth straight decision. The first-time All-Star is unbeaten in his last 17 starts, passing Kyle Gibson for the Rangers' single-season franchise record.

Texas nearly let it all go to waste.

Trailing 11-1, the A's scored four runs off Garrett Richards in the eighth, then hit three consecutive home runs off Brett Martin in the ninth. Martin got Stephen Piscotty to strike out swinging and Dermis Garcia grounded out to end it.

Corey Seager hit his 23rd home run. Adolis Garcia also connected and had a career-high four hits and three RBIs as the Rangers won for the second time in eight games. Jonah Heim matched a team record with three doubles on a day when eight Texas players had at least one hit and one RBI.

In three road starts against the A's this season, Perez has a 0.90 ERA.

Blackburn (6-6) is headed the opposite direction. Winless since June 16, the A's right-hander allowed 10 earned runs in 4 1/3 innings in his first start since the break. The 10 earned runs are tied for most in the majors this season.

Seager homered off Blackburn to jump-start a six-run fifth inning for Texas. Kole Calhoun had a two-run single in the frame while Ezequiel Duran, Josh Smith and Marcus Semien all drove in runs.

The A's had won three straight before falling short of their first series sweep since last September.

One day after a sliding back-handed catch in foul territory near the protective tarp while playing left field, Smith made another web gem - this time as a third baseman - when he chased down pinch-hitter Seth Brown's pop-up near the line in left field.

Rangers: Seager left for unknown reasons in the sixth inning.

Rangers: RHP Glenn Otto (4-6, 5.40 ERA) makes a second consecutive start against the Mariners on Monday in Seattle. Otto has lost four of his five start since coming off the Injured List.

Athletics: RHP Adam Oller (0-3, 8.56) faces the division-leading Astros on Monday in the first of three games against Houston.