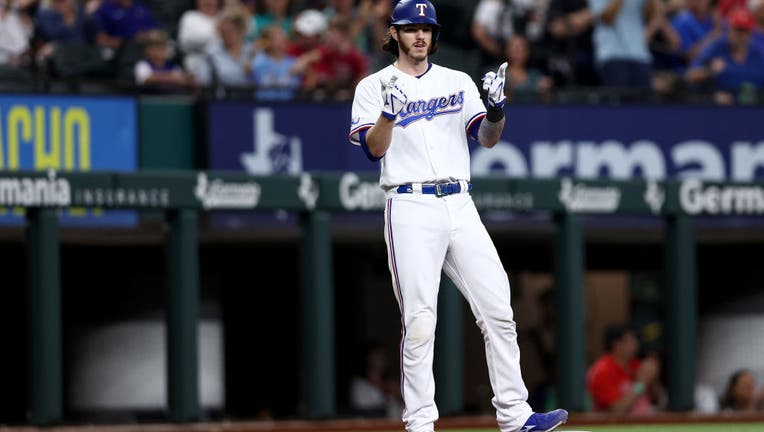 ARLINGTON, TEXAS - AUGUST 18: Jonah Heim #28 of the Texas Rangers celebrates after hitting a triple against the Oakland Athletics in the bottom of the second inning at Globe Life Field on August 18, 2022 in Arlington, Texas. (Photo by Tom Pennington/

Lowe blasted a 2-1 curveball into the right-field seats in the fifth inning, one inning after taking a pitch to his upper back. He has 17 homers this season, one short of the career high he set last year.

Adolis Garcia hit a single leading off the second inning to extend his hitting streak to a career-high 15 games. It's the longest active streak in the majors and Texas' longest since Elvis Andrus' 19-game streak in 2018. Heim's triple brought Garcia home.

Dunning (3-6) allowed two runs on four hits with four strikeouts and three walks. Before his Aug. 6 win over the Chicago White Sox, he set a franchise record by going 15 starts without a win.

A day after Mark Mathias made his Rangers debut, he hit a solo home run in the second inning in his first start. He was acquired from Milwaukee on Aug. 1 for reliever Matt Bush.

Sheldon Neuse, recalled from Triple-A Las Vegas on Wednesday, hit a two-run homer in the fourth for the Athletics' first two runs.

The Rangers earned a split of the four-game series and won its first season series against the A's since 2016, their most recent winning season.

Athletics C Shea Langeliers, who was promoted Tuesday from Las Vegas, played his first game in the field following two games at DH. Langeliers threw out Marcus Semien trying to steal second in the first inning. . Rangers LHP Matt Moore returned after going on the paternity list on Sunday and pitched a scoreless eighth with two strikeouts, . Texas optioned LHP John King to Triple-A Round Rock.

Heim was acquired in February 2021 in the trade that included veteran shortstop Elvis Andrus, who was released by Oakland on Wednesday.

Athletics: An MRI showed OF Ramon Laureano, who was removed from Sunday's game, has a Grade 1 left oblique strain. Manager Mark Kotsay said the next step will be working on pain tolerance.

Rangers: RHP Dennis Santana (ankle sprain) was sent to Round Rock to start a rehab assignment.