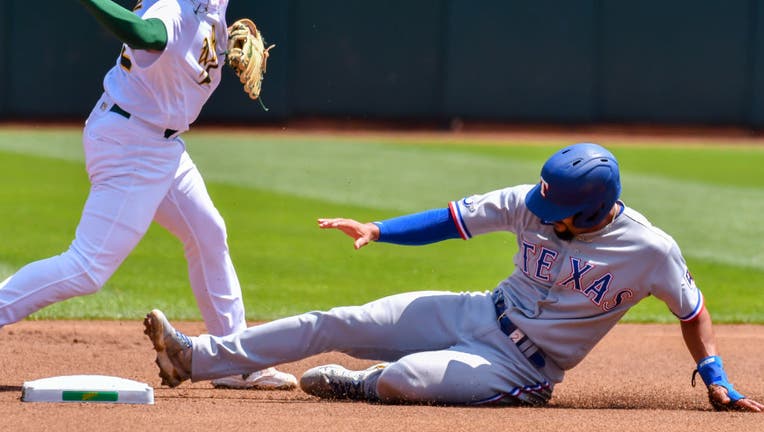 OAKLAND, CA - APRIL 24:Texas Rangers second baseman Marcus Semien (2) slides late into second as Oakland Athletics shortstop Nick Allen (2) throws to first base during the game between the Texas Rangers and the Oakland As on Sunday, April 24, 2022 at

OAKLAND, Calif. (AP) - Cole Irvin and three relievers combined on a four-hitter, Stephen Piscotty homered in his second game back from the COVID-19 injured list, and the Oakland Athletics beat the Texas Rangers 2-0 on Sunday to avoid a series sweep.

Irvin (2-1) allowed one hit in five innings to win his second straight decision. The left-hander didn't allow a hit after Marcus Semien's infield single leading off the game. Semien was erased on a foreout and Irvin allowed three runners after that -- two by walks and one by an error.

Semien, the former A's infielder who signed a $175 million, seven-year deal with Texas after one season in Toronto, had two hits for the Rangers. He doubled off Snead in the eighth.

Zach Johnson pitched two crisp innings, Kirby Snead retired three batters and Dany Jimenez worked out of a two-out, two-on jam in the ninth for his third save.

The struggling A's had scored one run in the first 21 innings against the Rangers before Piscotty's two-run drive off Spencer Howard (0-1) in the fourth. Piscotty lined a 2-2 pitch into the left field stands, two batters after Sean Murphy reached on an infield single.

Texas, seeking its first sweep at the Coliseum since 2015, had won four straight.

Howard, activated off injured list before the game, originally was scheduled to start before manager Chris Woodward opted to go with Garrett Richards as an opener.

Richards pitched two scoreless innings in his first start since Aug. 8, 2021. The right-hander has been used primarily as a reliever for Texas since then.

The A's played their first 17 games without a day off and get a break Monday before traveling across the San Francisco Bay to face the Giants.

Rangers: RHP Spencer Patton was placed on the 10-day IL because of a right oblique strain. . RHP Dennis Santana was reinstated from the COVID-19 IL. . RHP Nick Snyder was optioned to Triple-A Round Rock.

Athletics: 3B Kevin Smith hit in a cage and continued to take infield drills as he works his way back from a left ankle bone bruise. Smith could begin a rehab assignment within the next week.

Rangers: RHP Dane Dunning (0-1, 5.68 ERA) faces the Astros in the opener of a four-game series in Texas. Dunning is winless in two appearances against Houston.

Athletics: RHP Daulton Jefferies (1-2, 1.17) goes against the Giants on Tuesday. Jefferies has allowed two runs or fewer in each of his previous three starts.