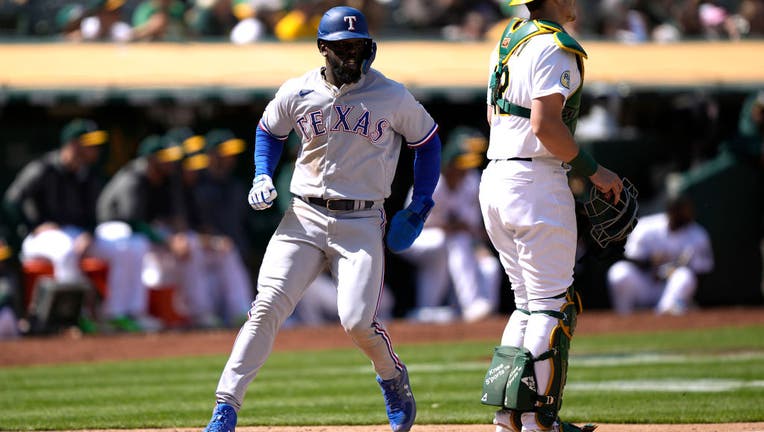 OAKLAND, CALIFORNIA - APRIL 23: Adolis Garcia #53 of the Texas Rangers scores against the Oakland Athletics in the top of the eighth inning at RingCentral Coliseum on April 23, 2022 in Oakland, California. (Photo by Thearon W. Henderson/Getty Images)

OAKLAND, Calif. (AP) - Brad Miller hit a key single in the eighth inning that drove in two runs after a replay review initiated by the umpires, and the Texas Rangers beat the Oakland Athletics 2-0 on Saturday.

Garcia scored easily but pinch-runner Eli White was thrown out at home by a strong throw from left fielder Tony Kemp.

The Rangers lost an earlier challenge, so they could not appeal. But the umpires initiated a crew chief review and overturned the initial call, ruling A's catcher Sean Murphy illegally blocked the plate. A's manager Mark Kotsay protested in between innings and was ejected.

The play helped Texas clinch its first series win of the season after dropping its first four. The Rangers have won three straight games after losing five in a row.

Four Rangers pitchers combined on a three-hitter. Brock Burke (2-0) got three outs for the win, and Matt Bush pitched the ninth for his first save.

Montas was dominant before running into trouble in the eighth. He permitted three hits, struck out eight and walked one.

Rangers starter Martin Perez was equally sharp after a pair of rough outings. He pitched six innings of two-hit ball.

The A's turned two double plays, including a rare 4-6-3-5 to end the fifth. With runners at first and second, Calhoun hit a sharp grounder to Oakland second baseman Christian Lopes, who threw to shortstop Nick Allen for an out. After Allen's relay to first was wide and pulled Christian Bethancourt off the bag, the former catcher alertly threw to third baseman Sheldon Neuse, who tagged Kole Calhoun scrambling back to the bag. After a short review the call was upheld.

Rangers: Spencer Howard is expected to be activated from the 10-day injured list to start Sunday. The right-hander has been out with a cracked fingernail since April 14.

Athletics: OF Stephen Piscotty and LHP Kirby Snead were activated off the COVID-19 injured list. ... INF Drew Jackson was added to the COVID-19 IL. ... LHP Sam Selman was returned to Triple-A Las Vegas.

Howard (0-0, 18.00 ERA) will make his second start of the season in the series finale. He was tagged for six runs in three innings against the Blue Jays on April 10. Athletics lefty Cole Irvin (1-1, 4.32 ERA) won two of his five starts against the Rangers last season.