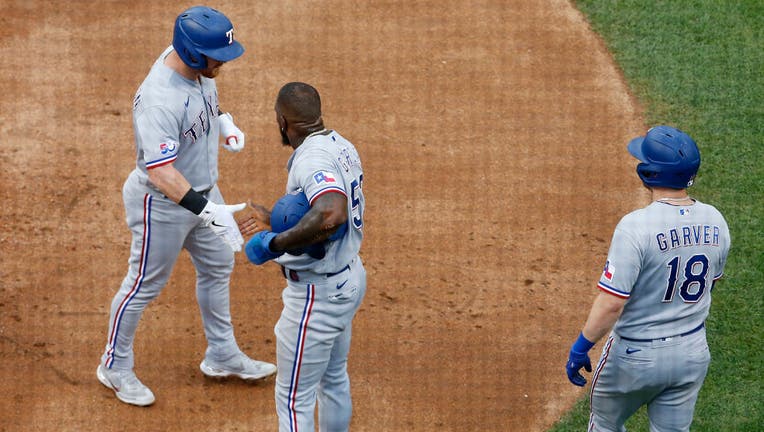 Calhoun hit a three-run shot off spot starter Trevor Williams in the second inning and third-year catcher Jonah Heim followed with his career-high 11th home run to give the Rangers a 4-2 lead. Both drives reached the front of the second deck in right field, giving Texas its fifth set of back-to-back homers this season.

Starling Marte launched an early two-run homer and Eduardo Escobar also went deep against Perez (7-2), who had given up only two long balls in 15 starts covering 93 1/3 innings coming in.

But the 31-year-old lefty yielded nothing else, permitting seven hits and two walks with four strikeouts in 6 2/3 innings. He is 7-0 in his last 11 starts, making a strong bid for his first All-Star selection this month.

After losing his first two starts this season, Perez is unbeaten in his last 14 -- a career best. His seven-game winning streak matches a career high set in 2017. Texas has won 11 of his past 12 outings.

Dennis Santana got four outs for the Rangers, and Joe Barlow finished up.

Calhoun, who struck out all four times up in Friday night's loss, sent an opposite-field solo shot to left in the fourth for his ninth career multi-homer game and second this season. He batted just .181 in his previous 24 games.

Corey Seager added an RBI single for Texas in the eighth, and Leody Taveras homered off Tommy Hunter in the ninth.

Williams (1-5) went 3 2/3 innings, allowing five runs and five hits in his seventh start of the year. He filled in a day after Chris Bassitt was scratched and placed on the injured list, with Mets manager Buck Showalter hinting the right-hander was dealing with COVID-19.

Rangers: RHP Spencer Howard was added to the taxi squad and threw a bullpen at Citi Field. He's a likely candidate to start Tuesday at Baltimore.

Mets: RHP Jacob deGrom is scheduled to throw about 25 pitches and two innings Sunday night in his first minor league rehab start for Class A St. Lucie. The two-time Cy Young Award winner has been sidelined all season because of a stress reaction in his right scapula that caused inflammation. He missed the second half of last season with a sprained elbow and hasn't pitched in the majors since July 7, 2021. ... 2B/LF Jeff McNeil was out of the starting lineup to rest his right leg and flied out as a pinch-hitter in the eighth. McNeil returned Tuesday after missing five games with hamstring tightness. "Just managing the leg, making sure we take some precautions," Showalter said. "He doesn't have any pain, any restrictions. Just kind of, you can tell he's a little tentative about it." ... RHP Trevor May (right triceps inflammation) threw off a mound and could make a minor league rehab appearance next week.

Mets LHP David Peterson traveled to Denver to join wife Alex, who is expecting the couple's first child. Peterson moved up a day and pitched six innings Friday night in Bassitt's place, striking out 10 in a 4-3 win. He won't be replaced on the active roster until the team formally puts Peterson on the paternity list, but it's uncertain who will start Wednesday in Cincinnati when his next turn in the rotation comes up.

Texas RHP Jon Gray (4-3, 3.89 ERA) tries to win his career-best fourth straight start Sunday when he faces RHP Carlos Carrasco (8-4, 4.85) in the series finale. Gray is 1-2 with an 8.87 ERA in five career games against the Mets. Carrasco is coming off a pair of rough outings in consecutive losses to Houston.